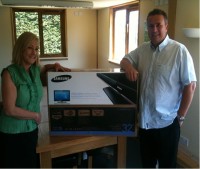 SX Amenity's recent Free Prize Draw for a Samsung 32" HD LCD TV was extremely popular, running just before the start of the World Cup, and caused a little friendly controversy in the office of the winner.

Debbie Bransom of Kestrel Contracts in Hook, Hampshire, was incredulous when she received the email telling her that she had won the draw and thought it was a scam until she received a phone call from SX Amenity to confirm it. It transpired that four people from Kestrel entered the draw - Debbie plus 3 men.

This is where the controversy comes in - her male colleagues wanted the TV for the office to be able to watch the football, but Debbie is taking it home to watch the tennis!

"I was really shocked when I received the call from SX Amenity telling me I'd won the TV - it was a great surprise though!" Debbie stated.

Richard Lunn, Managing Director of SX Amenity travelled to Hook to present Debbie with the TV; "We were pleasantly surprised by the large response to our Free Prize Draw and would like to thank everyone who entered. It was a real pleasure to meet Debbie and present her with her prize."

SX Amenity, a division of SX Environmental Supplies Ltd, which is being launched within the next couple of months, intends to follow in the footsteps of its' parent company by supplying excellent quality products to the amenity market at competitive prices, backed up by a service that is second-to-none.