by Charmian Robinson
in Industry News
on 06 May 2014

0 French give the thumbs up to Campeys ‘Perfecting Play™’ demonstrations 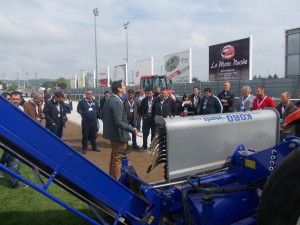 Campey Turf Care Systems, one of Europe's largest independent machinery suppliers, has completed the first leg of the 'Perfecting Play™' tour in France - with pitch renovations competed in Paris, Agen and St Etienne

The tour which focuses on 'Perfecting Play™' through learning about the latest sports pitch renovation techniques and machinery has already drawn an enthusiastic audience from across France.

"We have had an average of 60 people attending each renovation. All have some involvement with managing turf for sport pitches. They have come from a variety of backgrounds including local authorities, contractors and football/rugby clubs," said Francois.

"The feedback from customers has been very positive; they are happy to learn about new techniques and see them in action. It puts seeds of new ideas in their minds about maintaining their grounds and I am pretty sure this idea will grow and bring changes."

He went on to say "Our objective is not just to demonstrate machines but to illustrate how we can improve the level of sport surfaces in France, using the latest and up to date sports turf maintenance equipment. We are hosting the Euro in 2016 and we want our pitches to be first class.

The event was supported by the French football league (LFP) who invited all groundsmen and stadium managers of the first and second leagues. The idea was to encourage them to come and see how the industry is geared to produce better pitches.

The 2014 tour began in Paris on the 16th April at Ecole Polytechnique, a prestigious French engineering school, moving on to Agen on the 24th and St. Etienne on the 29th - held at football training grounds.

Next stop is the Netherlands for a combined sport pitch renovation with Campeys Dutch dealer, VGR Equipment and a factory visit to the manufacturer Imants BV.

Attendance is free and full details of all the dates and venues can be found on the website at www.campeyturfcare.com