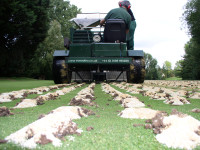 It's just across the Channel, it's passionate about golf, has some fantastic courses, some challenging weather...and a worse recession than we're experiencing. Are French head greenkeepers managing to keep their heads above the parapet when it comes to investment such as specialist turfcare and staffing levels? Penny Comerford finds a definite "oui!"

Eurozone members have even more financial problems to contend with than we Brits. Money is tight in France, which boasts some prestigious, long-established golf clubs in superb settings where clubs are under constant pressure to deliver excellence to players and host several major championships each year. It's tough for management and grounds staff and success calls for a pragmatic approach.

"The time of long waiting lists is past for golf clubs," says Michel Zimmerlin, director of Golf du Rhin. "It's true they have been touched by recession and have to tighten their budgets because membership is, at best, stable or slightly falling."

The French Golf Federation, FFG, witnessed a stagnation, even a slight fall, in its affiliates (which can be clubs or individuals) in 2010 for the first time in around ten years. Numbers stood at approx 410,000 for last year. But there are positive signs. Golf is still the fourth most played individual sport in France and shows no signs of losing popularity. With the 2018 Ryder Cup scheduled for the FFG's own purpose-built, 50,000 spectator capacity Golf National at Guyancourt, south west of Paris, a massive upswing of interest is predicted. The FFG expects its affiliations to almost double by 2018.

The unique beauty and accessibility of many of the French clubs keeps the players coming and golf's popularity high. 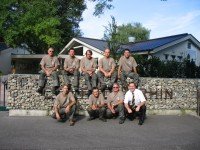 Golf du Rhin is such a club. Situated in attractive parkland, at Chalampé, near the borders of France, Switzerland and Germany, the club has representatives of all three countries among its 800 members. Recession may tempt some club managers to cut ground maintenance budgets, but that can be a false economy, says director M. Zimmerlin.

"If budgets are already low, it's more difficult to cut further, and it's going to impact on players. At Golf du Rhin, we have not cut our greenkeeping expenses since I joined. On the contrary, we increased our team from seven to eight greenkeepers, and have taken on a consultant to ensure that our working practices are the best possible. Each year we have invested in new equipment and materials." That investment is paying off, the members are very happy with the quality of the course, and this year saw a significant increase in green fee income.

The French economic climate is, however, having a fortunate spin-off for British contractors - the strong Euro. The French have realised that they can get good value for money by buying in British expertise in such areas as specialist aeration.

Many French courses work extremely hard with their large player numbers, national tournaments and long, hot, dry summers. This, together with the topographical features such as trees and mountains which make the courses so attractive, add to the head greenkeeper's challenge. Compaction, poor grass growth and old push-up greens made out of clay-based soils, mean that surface drainage is a problem. 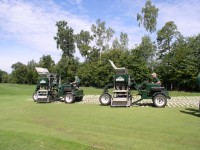 Increasingly, French clubs are turning to specialist aerators such as the Drill n Fill operated by Ecosol Turfcare. These machines can establish drainage ducts to a depth of 31cm, and backfill with a sand/soil amendment mixture to improve rootzone and allow surface water to percolate through to the drainage layer beneath.

The unique aerator can gently penetrate soil to a depth of 31cm, backfilling instantly with sand and a soil amendment such as the zeolitic Sportslite. This will relieve compaction and allow improved drainage as water percolates down the ducts, which remain functional for years and accelerate the infiltration rate.

Backfill can be tailor-made for each green, according to turf conditions, to give a soil exchange with sand, zeolitic or ceramic amendments and blends of nutrients. Removing the soil allows lateral movement in the rootzone, releasing compaction, whilst the increased percolation reduces the spongy, soggy conditions often seen in clay-based greens. Deep holes and good soil amendment encourage extensive, strong roots and results in better grass growth on the green. There is a choice of drill depths and diameters.

Golf de Chantilly is one of the clubs who plumped for Drill n Fill this summer. Set in superb parkland close to the beautiful old town which boasts chateaux, lakes, 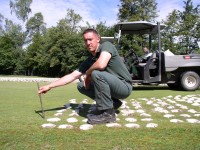 fantastic architecture and a racecourse at its heart, the course was designed by British architect, Tom Simpson, inaugurated in 1909 and attracted several aristocrats as presidents. It enjoyed a major redesign and extension at the end of the 1980s to create the second course at this busy club which attracts tourists and runs three major championships a year. These include Le Championnat France de Dames, an important thee-day women's tournament, and the international mens' Coupe Murat.

Golf de Chantilly offers two courses, the oldest of which is one hundred years old. There is a team of fifteen greenkeepers under assistant head greenkeeper Christophe Gaillot and director Remy Dorbeau. Normal turf care includes verti-draining and the John Deere Aerocore, which they operate to a depth of 3-4cms.
"Our soil conditions are good, with greens constructed from fine sandy loam to a variable depth," said M. Dorbeau, "but we had a problem with water not moving off the surface because, at 10cm down, there is a layer of chalk and a lot of organic matter. We needed to get down to the gravel drainage layer at 30cm deep, which is why we used this method."

He decided on a backfill of 85:15, sand to Sportslite, blended in the UK by Bespoke, Blending and Bagging (BBB), because the sand quality was felt to be superior to that which he could source locally.

The whole of the old course was treated and grass growth has already improved, and surface drainage is performing well after the first rain of autumn. "Yes it works!" said M. Dorbeau. "We had two big storms in quick succession, one during our big ladies' championship, but the greens drained easily and we experienced no delays." 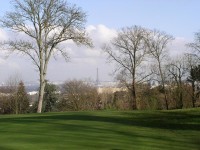 A similarly prestigious club, close to Paris, Golf St Cloud's was once owned by Napoleon. It can lay claim to a bloody battle, Bataille de Buzenval, having taken place on the fairway of the now 15th green. A view of the Eiffel Tower can be seen from the 14th.

It became a private sporting club with tennis, croquet, squash and polo in 1911. Designed by the British architect Harry Colt, the first of its two 18-hole courses, the Vert, was opened in 1913. The club hosted the 1924 Olympics and added the second course, the Jaune, in 1930. Thirty nations are represented in its membership, and it hosts a string of celebrities and visitors as well as its regulars.

It has hosted many important tournaments, including the French Open and the Esmond Cup, and continues to do so as it approaches its centenary year.

Course construction at St Cloud again uses the push-up greens type, topped with fine native soils. As at other similarly constructed old courses, director Denis Couture was experiencing slow drainage off the greens, due mainly to build up of topdressing on top of the clay base (as the image shows). He had the entire older course, Vert, Drill n Filled this summer, also imported BBB's 85:15 backfill and has booked in the Jaune course for 2012. He said, "I have seen good results from this process at other clubs and feel sure it will be the answer for us. Paris has experienced some very hot summers recently, and the greens have had a lot of use, so 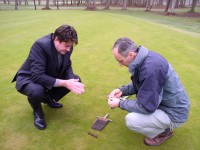 drilling down to around 30cm, completely replacing the rootzone and leaving a network of ducts, will aid water percolation and improve grass growth."

Golf de Fourqueux is another superb club in the environs of Paris which offers 27 holes incorporating trees, lakes and plains in the Marly Forest. The site of the course dates back to the 11th century, and it was home to an abbey and various members of the French aristocracy, before becoming a golf club in 1924. Unfortunately, its close proximity to Paris led to it being taken over by the Germans during the Second World War, and used as a base from which their cannons could blast the English aircraft. The munitions were stored in a former icehouse situated between greens 1 and 2 on the Blue course.

The present course was designed and reconstructed in the 1960s when 26,000 trees were planted. Today, Golf de Fourqueux is a popular country club offering superb facilities. The clubhouse is a restored farm, clustered attractively around the old farmyard. They have three sets of nine holes which are interchangeable, and can offer a different course each week with some scenic and often technical greens.

The greens are again push-up made out of native clay soil. Superintendent Jean-Marie Pardo heard about Drill n Fill from a marketing flyer circulated in France by Ecosol. He liked what he heard and booked four greens, 2000sq m, for treatment in August 2011. "We had been struggling with compaction and poor drainage, so we took advantage of a competitive offer." 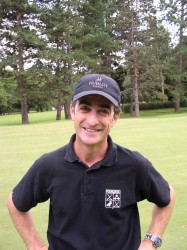 M. Pardo also decided to import the sand/Sportslite backfill from the UK. "It was of a higher quality and more suitable grade than I could get locally," he said "It was very competitive and delivered, with no fuss, well in time for the work. Two weeks after the treatment, we had heavy rain, and I could see that the treated greens were firmer and draining more quickly. We are delighted with the efficient operation and the result," said M. Pardo.

Golf La Boulie in Versailles, south of Paris, has also employed the method to good effect. Established in 1901, the top class venue is part of one of France's leading sports clubs, Racing Club de France, and has frequently hosted the French Open tournament. It boasts two 18 hole courses, Le Forêt and the oldest, La Vallée. They have an extensive, undulating parkland layout, with plenty of trees.

The old greens were built on a poorly draining base. The soil is clay with a terracotta drainage layer at a depth of 40cm. "Due to this construction, we have been having problems with greens that were slow to drain after heavy rain," said director, Jean-Franck Burou. "The greens were very compacted and the grass growth weak." Ecosol Turfcare was called in in September 2009 to deep aerate and fill all 18 greens on La Forêt course, which was constructed in 1968.

The winter operation was hampered by frozen greens, requiring a late start in exceedingly cold weather, but the French greenkeepers were extremely supportive. "Although we had injected 60 tonnes of material, the job was very smooth and efficient," reported head greenkeeper, Guillaume Grall. It was felt that the local sand used in the first job had been a little fine, so for La Vallée, the backfill was imported from BBB. It was a 95:5 mix of DA30 Kiln Dried sand and Sportslite, which has the additional benefit of retaining water in the rootzone - important in France where water used for the irrigation of sports grounds is rationed.

M. Burou had previously used Drill n Fill to good effect at Besançon Golf Club, so had no hesitation enlisting its services for La Boulie. "The results have been very satisfactory in all instances," he said, "There has been a net improvement in the drainage level and also from being able to introduce sand into these clay greens. This has resulted in a 'tightening' of the greens and they are now much firmer, with better grass growth. The greens are already firmer and draining faster."