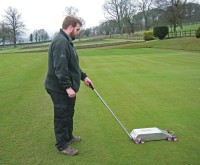 In my previous article, I shared my thoughts on the benefits of being able to control the frequency of cut, i.e. the number of cuts per metre, on a greens mower. In essence, being able to control the number of cuts per metre and lock it into the mower will ensure that every green is cut to exactly the same standard, no matter who is operating the machine.

I also suggested that the cutting unit is properly matched to the application, and close to its optimum, when the Frequency of Cut is closely approximated to the height of cut. A good rule of thumb is that the FOC should be within 20% of the height of cut.

Earlier this year, at one of the 'Playing consistent, staying consistent' seminars organised by Everris, Syngenta and ourselves, agronomist Henry Bechelet demonstrated how control over the number of cuts per metre improved trueness and smoothness.

The demonstration took place at the John O'Gaunt Golf Club in Bedfordshire, using the Eclipse mowers with their unique ability to alter and vary the Frequency of Cut. Henry showed that with a FOC that was too low - leaving a larger gap between cuts - could lead to a rifling or marcelling effect that slows ball roll. As the FOC increases and gets closer to the height of cut - within the 20% range - smoothness generally improves but, if the FOC gets too high, then smoothness can begin to decline.

In the practical demonstration on a single green at John O'Gaunt, the height of cut was set at 3mm. The green was divided into three sections and one of the club's greenkeepers mowed each section at a different FOC, using an all-electric Eclipse 122 pedestrian greens mower.

The first clip rate was set at 3.33mm, i.e. 300 cuts per metre; the second at 2.71mm (370 cuts/metre) and the third at 1.61mm (621 cuts/metre). The individual sections were then physically measured using the a Trueness Meter, a clever piece of equipment developed in conjunction with Sheffield Hallam University, that measures and records lateral and vertical deviation across the surface of the turf. It uses a golf ball-sized roller that moves at a predetermined speed across the recently mown surface in three different directions.

The results of this test showed that the FOC of 2.71mm (370 cuts/metre) gave the greatest improvement (20%) in smoothness and trueness, a result which will translate in practice into putts that bobble and deviate less from the golfer's selected direction. So, from this test, we can see that the optimum FOC for this particular green is 2.71.

Obviously, the optimum clip rate will vary between courses according to grass species composition, a green's design and build specification and the speed desired by the golfers but, once established, the optimum FOC can be locked into the mower.

However, further tests have proved that not only can optimum clip rates vary between courses, they can also vary between greens on the same course. But, more of that later. 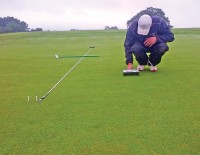 These results were replicated at other demonstrations during the round of seminars at the Marriott Dalmahoy Country Club near Edinburgh, The Mere Golf Resort at Knutsford in Cheshire, Robin Hood Golf Club in Solihull and King's Hill Golf Club at West Malling in Kent. Although the optimum FOCs were different, each test demonstrated there was an optimum for each test green, where smoothness and trueness improved.

Encouraged by these tests we have now commissioned long-term trials to scientifically prove that smoothness and trueness are improved consistently, and test the hypothesis that we can raise the height of cut while maintaining ball speed.

If we can prove this, we may have stumbled across the greenkeepers' Holy Grail - better grass health and a more vigorous plant, whilst maintaining or increasing ball speed.

Earlier in this piece, I alluded to the fact that optimum clip rates could vary between greens on the same course. Although we have no scientific proof yet, we do have the results of a series of tests undertaken by a very conscientious course manager who has devised a simple way of finding the optimum FOC for each green.

He divides each green into a number of sections, but not having the use of such a sophisticated piece of equipment as the Trueness Meter, he stimps each section to determine the speed and looks at the quality of cut using a prism gauge. Working on the principle that the faster the greens are, the truer 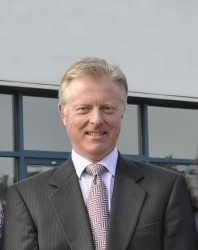 This is a very quick insight into the approach he is taking, and we will publish a full account in a later feature, but he has been able to achieve the same green speed on each green, give or take an inch either way.

Many course managers and greenkeepers may question the importance or relevance of FOC, but I would challenge them to talk to anyone who is using this technology. In our experience, club members notice the difference and are commenting about the improved surface quality of their greens.

Many greenkeepers are witnessing this immediate improvement using the factory setting of 4mm (250 cuts/metre), and I would also encourage them to 'play' with their FOC settings to see if they can find the optimum FOC for their particular course. I think they'll be surprised.

In conclusion, we realise we have something quite unique with our ability to control the frequency of cut on golf greens. For the first time, greenkeepers and golfers can benefit from this technology, which ensures consistent playing conditions across all 18 holes.