by Charlotte Eglington
in Cricket and People
on 13 Jan 2014 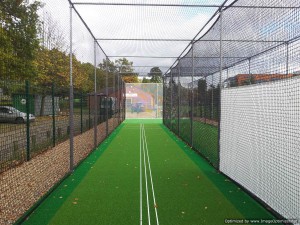 One of Surrey's oldest cricket clubs has invested in a state-of-the-art non turf practice facility from total-play Ltd that will not only boost training for the club's existing teams, but marks a key step forward in its development as Surrey's centre for Visually Impaired (VI) cricket.

Established in 1820, Frimley CC is based on a public recreation ground in West Surrey, close to the Berkshire and Hampshire borders.

Already running three Saturday league teams, two Sunday friendly teams and a thriving junior section the club has been awarded ECB Focus Club status and has been named the new home of Surrey's VI squad, having worked extensively with the Surrey Cricket Board to instigate VI cricket in the county.

However, to give Surrey's VI Squad the best chance of competing to its full potential a safe, secure area with a consistent surface was essential. Club Chairman, Gary Dunford, explains: "It was absolutely vital that we created a safe, secure and flat net facility at Frimley if we were going to develop VI Cricket at the site.

It was heartbreaking last year to try and coach a young Visually Impaired girl when, already challenged with not being able to see the ball until it is about 3m away, for that ball to suddenly dart of at right angles because it hit a bump on the outfield." 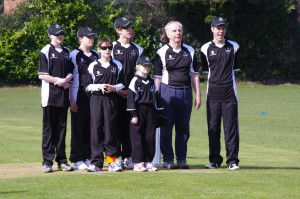 Already having won backing from the Surrey Cricket Board, additional funding for the project was secured from a range of sources including Surrey Heath Borough Council, Surrey County Council Councillors, The ECB, Lords Taverners, Surrey Cricket Board and Frimley Fuel Allotments Charity; alongside a variety of fundraising efforts within the club.

When it came to finding the right supplier, ECB approved installer for non-turf pitches total-play Ltd was selected to provide a two lane, 33m fully enclosed facility based on its ECB approved tp365 system.

A 2.4m high security fence and pedestrian access gate completed the basic specification with bespoke elements including a brightly coloured two-tone carpet, the use of white guide lines on the surface and white batting curtains to help players pick out the ball. Gary says:

"From the outset, I have been impressed with total-play's approach. The project is the culmination of three years' planning from the club's perspective, and is pivotal in terms of our future as a centre for VI cricket in Surrey.

We invited several suppliers to put forward proposals and James Coney not only seemed genuinely interested in finding the best solution to our unique requirements, but was happy to answer the raft of questions from the committee that followed. 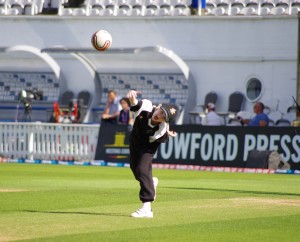 This open and honest approach gave me full confidence that Frimley was getting the best possible solution for our needs and made the selection of total-play as contractor very easy.

"Once on site, the team were not only professional and pleasant but kept me fully involved me as the installation progressed, and willingly gave tips on what we should do going forward.

In short they were a credit to the company; and we are now looking forward to being able to reap the full benefits of our new facility and the difference it will make to our visually impaired players in 2014."