4 From apprentice to full time groundsman... 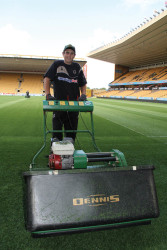 This time two years ago I was waiting for a answer from the Wolverhampton Wanderers Head Groundsman, Wayne Lumbard, as to whether I would be taken on as an apprentice groundsman at the club.

What a difference two years can make! Now I'm no longer an apprentice but a full time groundsman at the Premier League football club. Some readers may remember my article in the December 2008 edition of Pitchcare, under the label "The Apprentice's story" in which I wrote that, at the time, I was undertaking my NVQ level 2 in sports turf.

In April of this year, I had my certificate come through to say I had successfully passed my NVQ, and I intend on taking level 3 in September. Since I've been at the club I've also acquired my PA1 and PA6 spraying licence, a certificate of competence in pedestrian mowers, a certificate in tractors and attachments. I've also been on various sports turf maintenance courses through Pitchcare and also Health and Safety courses in turfcare equipment.

The highlight of my time at Wolverhampton Wanderers was coming runner up in the West Midlands Apprentice of the year award, which my College lecturer, John Rensaw, nominated me for. John, along with my manager Wayne, had to produce a document to the Apprentice Award panel as to why I should win the award.

Not only was I nominated for my work efforts at the club, but also being featured in numerous newspaper articles, appearing in PR stories for Lantra and industrial magazines as an exemplary apprentice.

Away from the highlights of my time at the club, the most important thing is my work. I feel I've come a long way since I first started and, every day, I'm becoming more and more confident in using a wide variety of machinery. I've recently stepped up to the role of mowing the Molineux pitch on a match day, which I thoroughly enjoy doing.

I'm just getting used to the fertilising programme we have in place, which I've also enjoyed doing on a few occasions. We have around twelve pitches at the training ground, four of them professional, and my favourite activity is marking them out. In my eyes there's nothing better than seeing a beautifully mowed pitch with bright, straight lines to go with it. To me, that's job satisfaction at its best.

Over the summer, the Molineux pitch has seen a major pitch renovation, with the installation of a brand new, state of the art, fibrelastic pitch, complete with pop-up irrigation and undersoil heating, I believe this to be a major learning curve for me, as I've seen a brand new pitch being made from the foundations upwards, and a different way in which we shall manage the pitch compared to before.

To have a fibrelastic pitch is great. Not only is it more player friendly, making players less prone to injury on a more elasticised surface, but also helps us groundsmen in relieving divots.

Through my time, I have met some great people with a lot of knowledge of the industry, and have also received great guidance off Wayne and my other work colleagues, Terry Carver and Kenneth Bates.

I've had great help from my College lecturer, John Renshaw, along with South Staffordshire College, who have educated me to a very high standard in sports turf, so much so I'm relishing the chance of doing my level 3.

I'd like to end by saying what a wonderful and diverse industry sports turf really is, with a lot more to it than many people think. I was very naïve about the industry when I first started but, now I've got two years experience under my belt and have been taken on as a full time groundsman, I couldn't think of a better job to be in.