10 From David to Goliath

From David to Goliath

Wigan FC's rise to the Premiership Who would have thought it! Little Wigan becoming a Premiership Football Club in only 25 years from birth. Their win over Reading ensured that the dreams of everyone involved in the club, especially the owner and Chairman, Mr. David Whelan, had been realised. But wait, this is only the beginning of their story.

Some 10 years ago Mr. Whelan started to change the whole town's view, which was then largely a rugby league community. Wigan Warriors were and still are the leading club, but now both the rugby and football clubs play their home games at the new JJB Stadium, which was built in 1999. 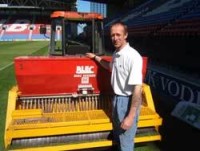 Ian Forshaw moved from the training ground to the JJB Stadium in 2002 to become the Head Groundsman. It is Ian who has the day to day responsibility for the playing surface.

As the results and expectations mounted so did the stresses and strains on Ian. Every Groundsman has and does experience demands from the players, club members and not least from ones own personal and professional pride. We are all professionals but, unfortunately, others do not always appreciate this and may question our abilities. 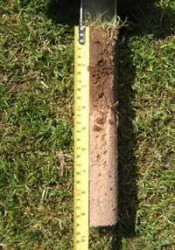 The Football League has reported back to Wigan that the marks given on the playing standard of the pitch by referees and visiting managers have been below average for the League's ratings since 2001/2002. As a result they seek measures to correct the situation.

Constant decline in performance, grass cover and wear and tear capabilities should in no way reflect upon Ian and his staff's dedication and ability. If you don't have the tools to do the job what can you expect! However, this is now being rectified.

The JJB Pitch - Back to Back

The JJB pitch is played upon by the Wigan Latics and Wigan Warriors for 50 of the 52 weeks per year. This represents in the region of 150 plus hours of usage taking into account the training and warming up and down sessions either side of matches, compared to 30 to 40 hours of usage by the majority of the Premiership and Championship Clubs, few of which accommodate both football and rugby. Indeed, between February and September it is quite frequent for matches to be played back to back. 7 back to back matches i.e. 2 games within a 24 hours period, took place in the 2004/2005 season,. 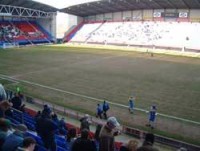 Wigan Warriors regularly play on the Friday night at 8pm and these matches are often televised by Sky TV. On such occasions Ian and his assistants prepare and erect all the posts, provide all the marking and other structures for the game and blanking out the football markings etc. During April the pitch saw 2 football and 1 rugby game in 4 days.

Immediately following these matches Ian and his staff removed all the markings, posts and rugby equipment and then repair the pitch divots and scar marks before trueing and manicuring the surface ready for football the next day. This requires the team to work through the night into the early hours and, following a short period of rest and hopefully sleep, they complete the final treatments necessary for the Saturday game. Following this match they start all over again.

It is not uncommon for Ian to work for over 60 hours per week when such matches take place. Nevertheless, a barrage of abuse comes readily from the managers, players, officials and the media, not to mention the paying public over the state of play, particularly if they lose. Even the most ardent of Groundsman tires of such negative comments.

It is extremely difficult to please everyone all of the time. This is particularly evident when football managers want tight short grass cut at 20mm, watered and groomed to enable slick passing, whilst rugby managers like grass at 40mm long with a dry surface for ideal handling. There is a conflict of interest, and it has become an endless challenge to satisfy both aspects.

Into a New Era

During discussions between Mr. Whelan and Ian, with the help of former Wigan and Manchester United Groundsman Keith Porter, a decision was made to seek a new, fresh agronomistic approach to aid in the rectification of the pitch. Mr. Whelan would not consider reconstructing the pitch or even allow for surface renovation to take place as there was no time factor to allow for it between the football and rugby fixtures, and the cost factor was not favourable. 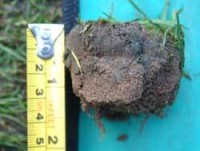 On 9th February 2004, David visited the JJB Stadium and undertook a full appraisal of the pitch, equipment and staff capabilities from which a prescription approach could be implemented.

The Desso was capped by 20mm of surface vegetation, top dressings and blacklayer rendering a poor traction surface for playing standards. The surface, grasses and top surface damaged easily and became unstable under wear and tear. Blacklayer was thick and dense being recorded from the surface to a depth of 50mm and in some areas even deeper. Only sparse Poa annua survived in such conditions.

The toxic level Index for Phosphorus was recorded at 6, compared with the pH reading of 7.8 in February 2004. Drainage was poor 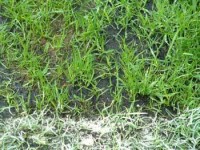 Certain areas, especially the players' tunnel onto the pitch, were particularly solid and poor, with light blacklayer content. The pitch was hard and unforgiving to fall upon and bounce was high and testing to players. Grass roots were thin, sparse and short, i.e. maximum of 20mm. No white healthy roots existed and, indeed, they could not in such inhospitable environmental conditions and high toxic levels. They were being poisoned! High salt levels from fertiliser applications compounded the situation even further.

On 19th February 2004 the first of the mechanical operations and soil conditioning agents were introduced to eliminate poor drainage and blacklayer.

New aeration equipment and working practices have been an integral part of the improvements. Field (GB) performed much of the initial renovation and prescription work, under the guidance of Keith, until the necessary upgrade of equipment was in place. Now Ian performs all the key renovation treatments in house.

In February 2004, Mr. Whelan was seriously contemplating a re-turf of the entire pitch at a cost in excess of £100,000. This was to try to instantly re-establish the pitch to its former pre-season appearance; however, he tentatively accepted David's recommendation of a less disruptive approach in the form of a 12 month prescription programme, which to date has saved the Club more than £80,000 of the original budget for replacement turf.

David implemented a long term approach to the remediation of the pitch. He used the new scienced Earth-Tec products alongside set procedures and the upgrading of equipment and materials which have managed to turn the corner of decline. This was recorded by the FA and the marks set by the officials this year have significantly improved for the first time since the 2001/2002 season.

Ian has said that it has been encouraging to be asked by visiting clubs and managers "when and who turfed the pitch?" and to receive such comments as "the pitch is much better than the last time". Ian is delighted to tell them that as of today, NO new turf has been laid on this pitch. Instead on going treatments have been implemented, recorded and monitored and slight adjustments have been made as appropriate. To reiterate, the pH is now recorded at 6.7 compared with the reading of 7.8 just over a year ago with an index of 2 and 3 for PK and Magnesium. The dedication and commitment of those concerned is evident in the drive to achieve the goal of an improved pitch. Ian has stated that whilst it is recognised that the pitch is still not perfect, it is acknowledged that we are getting there and that we are taking account of the high usage we get here at JJB, which will be a continual challenge.

The use of EarthMate, Carbon Matrix EarthLite (Zeolite) and other new scienced products such as the Mineral Electrolyte Bio-Remediation solutions and Soil Conditioning agents have enabled the JJB pitch to improve to an exceptional level. These natural and totally organic products are enabling the pitch to return to a balanced and healthy soil, which is rewarding us with good stronger growth. They are providing us with the "Vital Answer" to our chronic conditions.

It is understood that many other reinforced structures find similar problems once they have been installed for longer than 2 years. Some clubs are troubled with their pitch and they do not have rugby, football and training sessions on it or over 150 hours of use. JJB Stadium is unique in all aspects. The Earth-Tec products have certainly put the pitch back on the right road. We have no drainage problems, water penetrates readily even in excessive rainfall. However, there is a long way to go yet. Further improvements are still necessary to satisfy the needs of the new Premiership. Discussions have been undertaken between Mr. Whelan and David H. Bates regarding the Desso System and their proposal for this pitch. Other discussions are ongoing with pitch protection companies in an attempt to control the climate and weather conditions that aid and manage the pitch's ability to produce and sustain playing standards. The high rainfall in this area brings about its own problem as does the under soil heating system.

Unfortunately, once the last game of the football season has been played this only provides a small window of opportunity in which to renovate the pitch before the next home Warriors game. To perform such work in only 12 days is a demanding challenge indeed!

Mr. Whelan has stated that he is not now concerned about the JJB Stadium pitch. The surface has come under attack again this season from the fans and the opposition managers for the level of grass and the ability to play attractive football. However, we have seen great improvements in the pitch after Ian and his staff spent time on improving the situation. Mr. Whelan told the Observer, "We're not concerned that it will prevent us from going up. The pitch here gets used 50 weeks a year, that's more than most in this country, it's bound to look a bit worn. We've had an agronomist who has been here and has given us vital answers."

Paul Jewell, the manager, said, "It's not ideal, but the groundstaff are trying to improve the condition. It is improving, we need With comments like these they cannot be doing too badly.

David H. Bates is not aware that any other pitch, certainly not within the Premiership or Championship Leagues, takes this exceptionally high wear and tear factor. No pitch will retain good strong grass cover when you exceed 40 hours of play and the high Lancashire rainfall of over 40mm per year, all of which further compounds the problems. In relation to Southampton, Tottenham, Arsenal, Ipswich, Norwich, etc. the JJB pitch is very different climatically and, to David's knowledge, the others do not have activities other than football put on them, and they tend to be warmer drier and have a slightly shorter winter period. Hence it helps to retain a more resilient turf.

Everyone's eyes will be watching the Football Club Premiership results along with this unique pitch's ability to house higher standards of Premiership games. Representatives from the FA Premiership were present at the last home game against Reading and were more than happy with the quality of the playing surface. They commented that if this standard of playing surface is retained throughout the season there will be no concerns raised to Wigan Athletic F C.

It is recognised that the pitch will require ongoing remediation to bring about the highest possible qualities necessary for Premiership Football. Congestion and fixture requirements have to be resolved.

This new era for Wigan will not only be challenging in football terms, but to Ian and his pitch. 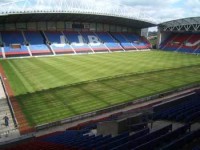 We wish them all the very best for the future!