0 From INTURF to Track in 36 hours

From INTURF to Track in 36 hours

Welsh hearts were broken when Russia put a halt to the hopes of our nation's football team to qualify for Euro 2004. As the fans left the Millennium stadium with their heads bowed, the INTURF team set to work to remove the turf modules in record time. 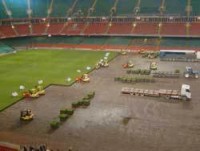 As you can imagine, there were an army of men and machinery needed for this operation. Christmas shoppers must have been bemused as they watched tractors and trailers being driven through the city centre laiden with modules of turf, on their way to the site just two miles away, where the turf is being stored.

Gareth Rees, the manager at INTURF's Bridgend Depot commented that thorough organising before hand plus the dedication and enthusiasm of his staff were key factors in completing the job with plenty of time to spare.

Past welsh rugby player, Rupert Moon, who had organised a time delay video camera, high up in the stadium, to catch the whole operation in progress, was overwhelmed with the procedure. He commented "I was absolutely gob smacked, at how quickly the modules were removed. The power and professionalism of INTURF is superb, I wouldn't expect anything less from a company which is associated with the Millennium Stadium". 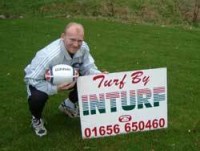 Mentioning welsh rugby players, INTURF was more than pleased to supply Neil Jenkins with some of their top quality cultivated TURF recently. This well known welsh fly half totally transformed his garden with the green, green, grass from INTURF. Neil and his dad, with a little help from a few friends practiced their landscaping techniques and enjoyed the challenge of laying the turf themselves. Now, when he wants to practice his kicking skills at home, he will be playing on the "best turf on earth"!!

Neil was more than pleased to comment "The turf was brilliant, I am more than happy. It has taken really well and looks great!"

Illusionist David Blaine, the man who spent over 40 days in a glass box, suspended over the River Thames unknowingly created work for INTURF at the capital. The thousands of people that had gathered near Tower Bridge, over the weeks, to stand and wonder at this unusual sight, did a great amount of damage to the grass verge near the river. After Mr. Blaine had come down to earth and the media's gaze was turned elsewhere, it was up to INTURF to transform the area back to its former glory. No, it was not an illusion, when literally over night, the area turned from a muddy brown mess into a beautiful green verge; it was just another great job by the INTURF team!! The ground was prepared and then 4000 metres of SS3 cultivated turf was installed via big roll system. Ken Livingstone's offices overlook the site, so hopefully the Mayor of London took some time out to watch the professionals at work and get some tips for his own garden!!