0 From mudbath to heathland perfection 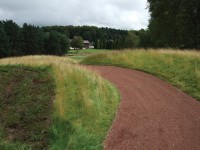 The 18th hole at the Beau Desert Golf Club at Cannock Chase in Staffordshire is beautiful. Lying in natural heathland, it consists of a series of mounds and hillocks featuring naturally occurring species including heather, gorse, bilberry, mat grass and bent and fescue grasses.

However, not so long ago, it was a very different picture. The 18th fairway was a mass of mud and concrete suitable only for excavators and tracked vehicles.

The fairway was originally built above old mining works and the ground had been slowly subsiding over a number of years. A repair had been attempted in the past, but without total success and, in 2007, the Coal Board decided to take action. After thorough investigation they found an underground void running through an area 100 metres long by 20 metres wide - and the fissure was right across the 18th.

Course Manager Steve Mucklow, who has been with Beau Desert for over seventeen years, was shocked when he discovered what the solution would be.
"They decided that, because of the size of the break, the best method of repair was to set in a huge concrete raft on the bedrock. It was a going to be a massive project." 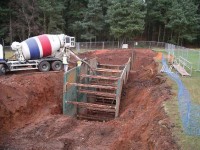 Work started in late October, 2007 and the chosen contractor, Carmalor, began by excavating a huge seven metres deep trench. Special steel boxes had to be constructed to stop the sides of the trench collapsing in on the engineers.

In all, over 2,500 tonnes of earth were excavated and over 50 cubic metres of concrete poured in to create the raft. Of course, during the excavation process, the weather turned very wet and the land became a quagmire, with the result that a new road had to be created to get the concrete wagons into and off the site.

The repair, when complete, was a deemed a success, but then came the second phase of the operation - reinstatement of the fairway.

"Our aim was to create an area in keeping with the natural heathland that is a feature of the course," said Steve. "Luckily, the contractor was able to provide a 360 degree excavator with a highly skilled operator, and he helped us create the contouring effect we were looking for." 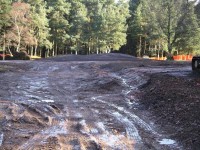 The original attempt at a repair had used poor quality backfill soil, and Steve and his team were determined not to repeat the mistake.

"We used fresh subsoil dug onsite to create the mounds and hillocks, but needed to top this with a growing medium with the correct properties to encourage the heathland varieties of plants and grasses to thrive" he said.

They turned to Cheshire-based Whitemoss Eco for the answers. After consultation and careful testing, two ideal mixtures were blended by the company - one for the wild growing areas and the other for the turf grasses. "It was vital to source a rootzone which would keep the Ph as acidic (4.5) as the natural soils on the course," said Steve. "Whitemoss came up the exactly the right mixes for our requirements."

The mixtures supplied consisted of peat, sphagnum moss, certified green compost and washed sands in varying percentages for each application. 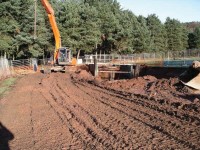 To complete the project, heather and bilberry turf was cut from other areas around the course and transplanted around two newly created bunkers. A mixture of heather, mat grass, bents and fescues, also from site, were then used to complete the mosaic effect. Finally, a low maintenance turf from Lindum Turf, consisting of crested hairgrass and a variety of fescues, was brought in to complete the reinstatement of the fairway.

Andy Law, Managing Director of Whitemoss Eco, said that Beau Desert was typical of the type of project the company got involved in. "Increasing numbers of course managers and groundsmen are turning to us because we can custom mix both rootzones and topdressings, all incorporating our certified green compost, to meet individual needs or to match to existing environments," he said.