0 From potatoes to playing field in three easy steps 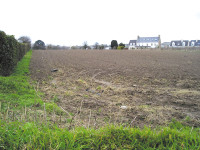 As part of my work for Fields In Trust (formerly the National Playing Fields Association) I organise and operate the trading arm which works with a variety of organisations, from Parish and Town Councils to sports clubs, to improve playing fields and sports facilities; it does also lead to the odd new playing field being built. Sometimes the work involves producing a report about maintenance, sometimes it is a detailed specification and tender for a particular project, and sometimes it is overseeing and managing contracts.

One such project was when we were asked to produce a specification and oversee a project on the delightful island of Jersey for the States Education Department. It sounded simple enough - just take this farmer's potato field and turn it into a primary school playing field.

Like everywhere else in the United Kingdom funds are tight, not only for construction but also the added problems in Jersey and the other Channel Islands of having to work with the equipment, sands and soils that are available on the islands. In addition, Jersey has a micro climate of its own. 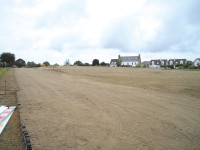 So, after an initial meeting with States Education to discuss the costs involved and the constraints on the project, we were asked to produce a specification. Having worked in the industry for over twenty years, I always like to involve the groundstaff who are expected to maintain the facility when it is finished.

The maintenance for this site was to come under Parks and Gardens, and it made my life a lot easier when they also tendered for the work and were awarded the contract to produce the playing field. My contact for all the works we have undertaken on Jersey, including this project, has been Parks and Gardens Assistant Manager, Steve Landick. Steve and I discussed all the issues and it was at this point that an island architect, Andrew Harvey, was brought in.

The initial brief was to produce a playing field, with possibly a netball court at the bottom, and fencing all around. Due to parking constraints a one way road was also agreed for dropping off and picking up school children. 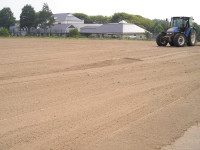 There were no funds available to put any type of drainage into the playing field design and, of course, the soil was clay - but when we first assessed the site, we found it had a reasonably acceptable fall from top to bottom, which both Steve and I felt could be levelled, keeping the current contours to aid drainage run off. However, Andrew suggested a three-plateau playing field, the top plateau for the playing field, the middle as a picnic area with the bottom plateau prepared as a netball court. After further discussions between all the parties involved this was specified and tendered.

The initial earthworks and surface levelling were undertaken by contractors Jayen who would return to install the road and fence once the playing field works were completed. The levelling was completed relatively quickly under the supervision of both myself and Steve.

Steve's team then moved on to site to to produce the final tilth, sow the seed, and wait for nature to take its course. There was no irrigation available to aid germination. 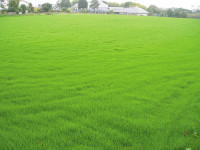 As with any project that involves working with nature and the elements there were one or two problems - some bank erosion with the intensity of rain that fell, for instance. The rain also washed some of the seed off the site and down onto the road, but the worst problem we had was that the run off was working beyond expectations.

There was no holding water on the actual playing field and we had produced a pool at the bottom of the site where the proposed netball courts were to be installed! We did have a meeting with a rather irate gentleman who accused us of flooding his house - which fortunately turned out not to be the case - and a piped drain was installed at the base of the site to deal with the water in this area.

Six months on, at the end of August this year, the project was completed and signed off, the States Department and School are happy; the playing field is well used and has held its first sports day. The one way road system works well and there is not so much congestion around the school. The netball court has still to be completed, and, in fact, there have been proposals that it should move to another location on the site. Trees have been planted and the pathway from the road to the school is completed. 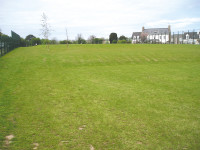 Thanks to States of Jersey for continuing to employ Fields In Trust for playing field projects on the island, Andrew Harvey for understanding my ramblings about playing fields and especially to Steve Landick and his team, without whose assistance and continued support my visits to Jersey would be a lot more problematic and frenetic.

Fields In Trust is the new name for the National Playing Fields Association. Alan Penn is Technical Manager for Fields In Trust and can be contacted at alan.penn@fieldsintrust.org or by telephone at 02476 399251