2 From Preston to Paris

As a youngster it was always my dream to work within the golf industry - not as a greenkeeper, but hopefully as the next Greg or Ernie playing on the Tour. With a 7 handicap and dreams diminishing day by day, I thought that greenkeeping would probably be the next best thing, as making the Ryder Cup team was looking like it would never happen. 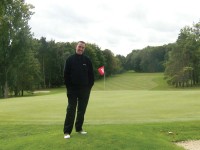 At the age of 16 I enrolled on a one year Horticulture Course at Myerscough College. After that I went on to complete the National Diploma, which was then a three year course with two six month placements. I was lucky enough to do my placements at two fantastic clubs, one being the Wisley Golf Club in Surrey and my second at Lutrellstown Castle in Dublin. Both of these placements were a fantastic experience for me, and meeting my wife Sarah at Lutrellstown really put the icing on the cake.

After my return from Ireland I worked at Penwortham Golf Club in Preston for nearly six years and was thrilled to be made Deputy Head Greenkeeper at the age of 21 working alongside my good friend, Gary Robertson.

After six years at Penwortham, and having finished my part time Foundation Degree, I decided that I would like to gain some overseas experience and maybe even learn a new language. In August 2007 I applied for the position of Assistant Golf Course Superintendent at Golf de Saint Nom La Breteche and, after two interviews with my current boss Bill Warnick, I was given the chance to work at this fantastic parkland course. My French adventure was about to begin.

Golf de Saint Nom la Breteche is a 36 hole championship golf course fifteen kilometres to the west of the city of Paris, near to the suburb of Versailles, and is the former home to the Lancome Trophy on the European tour. The course consists of two 18 hole courses named the Parcours bleu and the Parcours rouge (the blue and red courses). There is also a 7 hole beginner course named Parcours blanc (the white course). 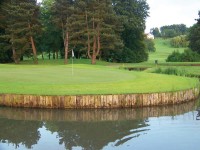 St Nom was originally designed by Fredrick William Hawtree in 1959 and is a parkland design. The club has hosted many large tournaments in the past including The Canada Cup, The French Open Championships and the Lancome Trophy, with famous past winners such as Arnold Palmer, Gary Player, Seve Ballesteros, Lee Trevino, Veejay Singh, Colin Montgomerie, Mark O'Meara and Sergio Garcia gracing its fairways.

The 260 acre site is looked after by a multinational greenkeeping team which consists of twenty-two members from countries such as France, Portugal, Spain, America and England. The team is led by Bill Warnick GCSAA who has thirty years experience both on courses in the USA and in France.

Bill has been at the Club for the past fifteen years and regularly shares his wealth of experience with myself and the rest of the team. We couldn't ask for a better role model. In addition to Bill and I, there is the first assistant, Frank Burrelle, who has been at the club for the past eight years. We also have two full time mechanics and two full time irrigation technicians. The club also has a full time gardener who looks after the courtyard and keeps the area around the clubhouse looking fantastic all year round.

The greens at St Nom consist of a mixture of original soil based constructions, modified soil constructions and, more recently, USGA constructions. The predominant grass species on the greens at the club are Creeping Bent (Agrostis stlonifera) and Annual Meadow grass (Poa annua). These are maintained at a height of between 3mm-5mm throughout the year. Topdressing is applied on a monthly basis amounting to 150 tonnes per year, per course, and regular solid tine and hydroject aeration is carried out in conjunction with twice yearly hollow tine aerification. Rolling is carried out every other day to maintain green speeds at an acceptable level.

A spoon feeding fertiliser programme is adapted on the greens along with monthly applications of Spatio growth regulator (trinexpac-ethyl), primer wetting agent and regular shots of iron. 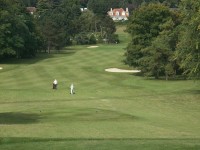 Fairways are maintained by four Toro 6700 seven unit fairway mowers, and regular applications of Spatio growth regulator are applied to cut down on fairway biomass. This allows the greenkeeping team to maintain two cuts per week in the height of the growing season. Fairway height of cut ranges from 12mm to 14mm.

Mowing of tees and approaches is carried out on a twice weekly basis throughout the growing season. These are maintained with three Toro 3100 machines. The tees and approaches, like the rest of the close mown areas, are treated with Spatio growth regulator. Scotts Sierrablen slow release granular fertiliser is used on these areas to provide nutrients and help the turf stand up to the wear and tear of daily play. Tees height of cut is 10mm and the approach height of cut is 8mm.

Maintenance of the semi-rough is carried out on a once weekly basis using a Toro 4700 and a Toro 3500D. This is a two man job with the larger Toro 4700 cutting one band around the fairways and concentrating on the more open areas, allowing the smaller Toro 3500D to cut in between bunkers and the tighter spaces. Both of these machines cut around the club house and maintain other areas such as the childrens playground and the grass banks which surround the members swimming pool.

The rough is unique at St Nom but behaves in a very similar manner to rough I have worked with previously in the UK. During the earlier summer months the Toro 580D rough machine is out non-stop and cutting it is a full week task. However, as we experience very high temperatures in the summer, it tends to stop growing and maintenance is carried out as and when needed. The aim of stopping mowing and letting the rough grow a little is to create a wispy uncut appearance that produces seed heads and looks brown in colour. The timing of this is crucial, and cutting too late can end up with us missing this opportunity, resulting in areas burning off in the high temperatures. 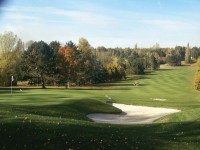 The long rough (or the hay) is maintained with a flail mower on a less frequent basis and receives in the region of two to three cuts per year. By doing this, long seed head rough is produced, with little weed invasion. It looks fantastic and adds definition to the course.

Raking of bunkers can be carried out as often as three times a week depending on play and competition schedules. A mixture of hand raking and machine raking is used and regular edging and weeding takes place to keep the bunkers looking in tip top condition throughout the playing season.

Temperatures in the Ille de France region can become very high in the middle of summer and, in order to maintain turf quality, the club boasts an irrigation system that can provide adequate water to most areas of the course. Irrigated areas include greens, approaches, fairways, tees and some of the tee banks.

The irrigation system is a Toro Sitepro satellite which, in turn, is linked to a weather station for accurate up-to-date environmental conditions and evapotranspiration rates. We are also lucky enough to have a fertigation system which allows us to pump iron onto the playing areas through the irrigation system when required, and this can enhance turf appearance, especially when leading up to big competitions.

As you can see from our maintenance schedule for the summer, we are a very busy team. As there is a mixture of competitions played on both the red and the blue courses, our aim is to maintain both to a very high standard. The members pay very high subscriptions, therefore, providing customer satisfaction and enjoyment has to be the top of our priorities. 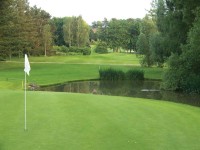 The team has a very busy schedule planned for the winter period as we strive to improve the course. Projects planned for this winter include tee levelling, bunker reconstruction and tree planting. We also plan to change one of the soil based greens to USGA specification, so the guys are going to be very busy, and next year will soon be upon us befor we know it.

Looking back at my experiences over the past six months, I notice that greenkeeping in France is very similar to working back home in the UK. We work with the same grass species and carry out very similar practices but, being based a lot further south, I do notice large differences in temperature and humidity. This, in turn, has led to different management practices, especially regarding irrigation.

We must be on our guard all the time over the summer for diseases such as dollar spot (Sclerotinia homeocarpat), which seems to do well in these kind of climatic conditions.

The most challenging and, at the same time, rewarding aspect of my move to France has been learning the language. Initially, I had very little knowledge of French but, with patience and persistence, comes confidence. Now, my ability to use the language is improving every day, I find it extremely rewarding and a fantastic sense of achievement being able to understand and converse with my team and the French people. It's been a steep learning curve but, I'm pleased to say, I'm getting there.

I would highly recommend working in France to anybody who ever gets such an opportunity. The people are fantastic, the weather is good, the lifestyle is relaxed and, if you're a fan of fine wine, great restaurants and fantastic culture, this is definitely the place to be.