0 From Wembley to Dixie Grammar School

With the school undergoing major improvements to all areas, our editor finds out what that means for Stephen and his new apprentice

The earliest records of the school's existence date from 1320, but it gained its present name when it was re-founded in 1601 under the will of an Elizabethan merchant and Lord Mayor of London, Sir Wolstan Dixie.

The most distinguished of the school's former pupils is Thomas Hooker, founder of Hartford, Connecticut, and Father of American Democracy. The best known of its teachers is undoubtedly Dr Johnson, moralist, poet and author of the famous dictionary, who taught here in the mid-eighteenth century.

The main building of today's school was built in 1828, and faces the historic market square of Market Bosworth, making a distinctive landmark. However, in 1969 the school was closed, as new, much larger comprehensive schools found favour. 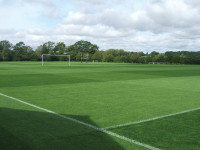 It was to revive the best aspects of the grammar school tradition that the Leicestershire Independent Educational Trust was formed in 1983 and, four years later, the Dixie Grammar School was re-opened as a selective, independent, day school for boys and girls of all backgrounds between the ages of ten and eighteen.

The school has recently announced ambitious plans for the redevelopment of its campus at the centre of the historic town, and launched an architectural competition which has resulted in four architectural practices, all of whom have experience in the design of school building and working with listed buildings, being shortlisted.

The key focus will be a new multi-purpose hall and science block - the initial phase will also include the building of a new car park for the use of both the school and the local community, including the doctors' surgery.

In 2009, the school invested in modernising and redeveloping its sports ground on the outskirts of the town within walking distance from the school. The ten hectare site provides three senior natural turf pitches (one rugby with a grass six lane athletics track) on the lower plateau, and two senior football pitches on the high plateau, with plenty of room to provide further pitches in the future. In addition, the school is currently seeking planning permission to install a brand new artificial hockey pitch.

In 2006, the school commissioned the STRI to write a report on the sports ground. Its recommendations were to invest in a primary and secondary drainage system to help improve the drainage capacity of the pitches. So, in 2009, as well as a new £750,000 sports pavilion, the school employed the services of Pugh Lewis to undertake the drainage work, installing a primary system at five metre centres and sand bands at one metre centres for the two plateaus.

At the time, the school used the services of a local contractor to cut the grass and mark out the pitches, It was always the schools intention to employ a full time groundsman after they had invested the best part of £140,000 on the drainage, plus the cost of the new pavilion.

At the same time, Stephen Green was looking to move nearer home, heard about the school's search for a groundsman, and duly applied. The school did not need much persuading, as Stephen comes with an excellent pedigree, having spent the best part of twenty-five years working in professional football, firstly at Leicester City from 1988-1996, before moving to Nottingham Forest working under Steve Welch until 2005, and finally as Steve's assistant at the new Wembley Stadium.

Stephen felt he needed a change from professional football, and also wanted to work near his family who live just fifteen minutes away from the school.

So, in 2009, he took up his new appointment working alongside the school's bursar, Martin Roe, who he has struck up a excellent working relationship with. It was

not long before Stephen had persuaded Martin of the importance of investing in the right equipment, and the school purchased a new Toro Sidewinder triple cylinder mower, a Kilworth rear rotary deck mower, two dimple line markers, a 34hp compact tractor and a Charterhouse Verti-Drain. A new Blec seeder and Sisis Multitiner came a few months later. Along with a petrol hedge trimmer and a strimmer, Stephen started off with an excellent set of equipment. He also got the school to invest in two new sets of football goalposts, plus a new set of rugby posts. Two sets of five-a-side goals were also updated to ensure that they complied with the new goalpost safety regulations.

When Stephen arrived, the pitches, even with the new drainage in place, were not in the best of health. Very little attention had been focused on them, and the condition of the sward was poor. The first job Stephen did was to have the whole ground sprayed with a selective weedkiller, as there was more weed than grass. Also, many of the sand bands had sunk. So, another of the pressing tasks he undertook was to spend hours backfilling and seeding the drainage runs.

Once Stephen has levelled and seeded all of the drains, both upper and lower levels of the ground were seeded from corner to corner.

This work, combined with a revamped mowing and feeding strategy, soon transformed the quality of the surfaces.

After twelve months of working the ground on his own Stephen asked the school to take on an apprentice groundsman, and Leigh Chapman was employed, with Stephen as his mentor.

A suitable work-based sports turf course was sourced, which allowed Leigh to be on site every day working on the grounds and not in a classroom miles away.
The course began in September 2010 and, within a few weeks, both Stephen and Leigh had settled in to the one day a week course work. Each week, Stephen timed the course around the work that was actually going on at the school.

Every six to eight weeks, Leigh's assessor would come in and mark the work that he had completed. Leigh would fill out a job sheet every time he completed a task. After each task, Stephen was required to complete a witness statement, which was basically a short report on the tasks that Leigh had undertaken. These job sheets and witness statements were then assessed and added to Leigh's course folder.

The time period allowed to complete the course was sixteen months, but Leigh managed to complete his course work in just under twelve months. In that time, he not only learned the basic skills and knowledge, but also passed his PA1 and PA6 spraying certificates.

Like most schools, the pitches at Dixie's are in constant use, with different sports being dictated by the school terms. Football and girls hockey is played during September and October - the autumn term. Football, hockey and rugby during the winter term; football and rugby in the spring term; and football and athletics in the summer term. The pitches are rested from classes from Christmas through to early February, as the school play net ball and basket ball. The only exception is when there are matches planned.

Renovation of the winter sports pitches begins towards the end of March, when Stephen will overseed using the Blec multiseeder, applying between 6-8 bags of MM60 per pitch, depending on the requirements of each pitch. The rugby grids and football grids will also be seeded at the same time. Its important for Stephen to get the seed in early whilst there is still plenty of moisture in the ground. The pitches receive a summer dressing of slow release Lebanon 20:0:5 in April, with a second dressing being applied in June or July depending on the weather conditions.

As the year goes on, Stephen then applies an autumn/winter dressing of Country Club 8:4:24. After the turn of the year, a second dressing of 5:5:10 will be applied.

The pitches are generally mown two or three times a week during the growing season using the triple cylinder mower. Twice a week the pitch surfaces are tractor brushed to keep the worm casts to a minimum. That criteria, though, has to allow for a pitch to be mown and marked out on the day of a fixture. The rugby pitches are 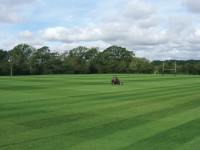 kept at 50mm, whilst the football pitches are mown at 25mm. The direction of mowing is changed for every cut. Being soil based pitches, it is important to keep them well aerated, ensuring any surface water is able to access into the drainage system via the sand bands and primary drains.

Stephen aerates every five to six weeks using the verti-drain, and weekly using the Sisis Multitine. Within this regime, he changes the tine size and operates at different depths to avoid creating a pan layer.

The school also have an artificial cricket wicket which, when in use during the summer months, requires the outfield area to be mown at 17mm.

Before the school closes for the summer break, Stephen has the ground sprayed to kill off any weed that are in the sward. After the school has closed for the summer the renovation work starts. This involves cutting down the sward, aerating with the verti-drain and topdressing, using forty tonnes of material on the senior pitches and twenty-five tonnes on the smaller pitch. The sand is brushed in three different directions, and then a second pass is made with the verti-drain, followed by another two passes with the brush. More seed will be sown, if required.

As with any sports pitches, it is the attention to detail that makes them stand up to the rigours of play, and Stephen and Leigh spend time divoting after matches to ensure they remain in tip-top condition.

A dimple wheel-to-wheel linemarker is used for marking out, with Stephen always using string lines to keep lines straight and true. All equipment is religiously washed down and dried off after use, before being storing away.

The school has plans to develop the site further and, once the new artificial hockey pitch has been completed, Stephen is looking to add more natural grass pitches. He is also considering building a cross country running course around the perimeter of the sports ground.

The culmination of the work, and the improvement of the playing surfaces, has resulted in the school hosting a number of additional fixtures, including national schools five-a-side football and rounders tournaments.

As for further improvements, Stephen is looking at updating the irrigation system and hoping he can enlarge his mowing fleet with the purchase of a couple of Dennis G860 mowers fitted with the cassette systems.

There is no substitute for having the knowledge, drive and the right equipment. In Stephen Green, the school has one of the most experienced groundsmen working in our industry, and Leigh has the best mentor he could possibly have wished for.

Stephen is particularly pleased with how Leigh has taken to learning the skills required of a groundsman, and is now confident in his ability to take on additional responsibilities.

Stephen is enjoying his new lifestyle at the school, with the peace and tranquillity the school grounds offer. It's a far cry from his time spent at Leicester, Forest and Wembley, but equally as enjoyable and satisfying.