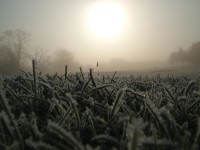 We are now at the time of year when ground temperatures are still warm and overnight air temperatures are much cooler, producing the inevitable morning dew conditions. Dew, in itself, is problematic, giving moisture for disease and nematode activity to increase. In addition, morning dew hampers mowing regimes, topdressing applications etc. and is generally disruptive to the modern turf managers plans.

However, there is also perhaps another issue to consider in these times of austerity and financial hardship, and that is the cost to any sports turf related business having to close its doors or limit play in order to protect its surfaces during frost conditions.

For example, the resulting closure to golf courses, or the use of temporary greens, may be costly in terms of lost revenue across all sectors of a hotel business or golf club operation.

There is a general debate during the colder winter months as to when to protect, or if at all. In this article, I would like to look at exactly how frost forms, its effect on the plant, and methods and options that may help its prevention on key surfaces.

When temperatures drop below freezing on a golf course, a variety of problems can arise with the grass plant. Damage, or potential damage to the turf canopy that makes up the greens, fairways and roughs, is a serious situation. Delays in starting times to allow frost to dissipate can cause serious loss of revenue and disruption. To understand what we're dealing with, and whether to protect or not, we must know exactly what is going on within the plant itself. 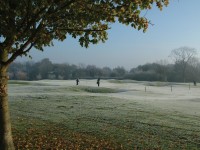 Frost is the formation of white ice crystals on an exposed outside surface. When the temperature of a surface drops to the dew point in the air, condensation will occur. If the temperature is below freezing, the water vapour will transition directly to a solid, which we see as the familiar white frost crystals. If the surface temperature is above freezing, the condensation will be liquid dew droplets. The occurrence of frost on a plant surface will not cause any harm in and of itself.

The major concern is not the freezing of water vapour on the outside part of the plant, but rather what happens to the water inside the plant. If this water freezes, plant tissue damage is possible. For annual plants, this can be a death sentence. This is of greater importance to those with annual meadow grass surfaces, as their more delicate inner tissue can be irreparably damaged by the expansion caused by the freezing water.

So, the important point here is that the below-freezing temperatures do the damage, not the frost itself. In fact, visible frost will not occur even when temperatures drop below freezing, if they do not match the dew point level. This is where the real damage is done. Visible frost is, however, a good warning sign that plant damage has occurred or may occur. 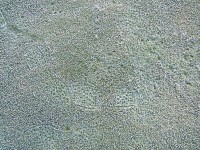 Radiative cooling occurs on all surfaces above absolute zero. During the day, this is usually not a problem since the earth's surface gains more energy from incoming sunlight than it loses. But, when the sun goes down, the surface radiates heat out into space and is not replaced, meaning the surface temperature falls and will continue to fall until more energy is coming in than going out. This means the low temperature usually occurs around sunrise so, sometimes, a frost/freeze won't occur until just before it gets light. There are even times when frost begins forming after sunrise, and even after greens are starting to be cut and prepared for the day.

Wind will mix the air, bringing down warmer air from above and raising surface temperatures. Higher winds will speed this process, whilst light-to-calm winds 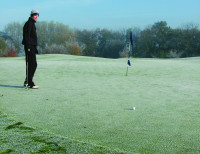 allow for the maximum cooling effect. The increase of temperature with height during the nocturnal inversion can be dramatic. At times, temperatures a metre above the surface can be above freezing whilst the surface itself is experiencing a frost or freeze.

Radiation frost/freeze situations are often very localised and very dependent on topography and elevation. In these relatively calm situations, the colder, denser air sinks down to lower levels, Valleys are colder than surrounding hills and are more prone to frost/freeze damage.

The other potentially damaging situation is called an advective freeze. In this case, the cold air moves into or advects into a region. By definition, these events are associated with wind. Clear skies also are not necessary.

Under these conditions, temperatures decrease with height - there is no nocturnal inversion. Higher elevations are more prone to damage. These are the classic freeze events with no visible frost. The cold air mass involved is very dry, and the temperature almost never reaches the very low dew point. Preventive measures, which will be discussed later, are usually of little help for these often widespread events.

Of the two situations described above, the radiative frosts usually pose the greater risk, since they are more common during the early and late parts of the growing season when the grass plant is more susceptible to damage. 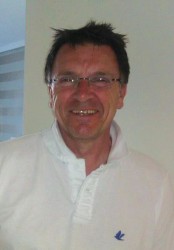 In terms of preventing frost/freeze damage, the best tip is one many sports turf managers will have little influence over, site selection. Pay special attention to low lying areas, since cold air drains into these "frost pockets" on those radiational cooling nights. Maximising early-morning sunshine and watching shading on the east side of a putting green can also help.

To get a more specific idea when cold temperatures are a risk, check the frost/freeze records from the Met Office. They have probability charts for the last occurrence of 32OF temperatures in the spring and the first in the autumn. In addition, low temperature records for each day are probably kept by a nearby regional Met Office station.

Protection is, in my opinion, something that should be clearly considered. Damage can easily be done to the grass plant and, in particular, annual meadow grass dominated swards.

Covers are an option, but are time consuming and, of course, there is the damage caused to surrounding areas during their removal if a frost is still present. The cover, whatever it may consist of, will limit radiational cooling at night.

The use of dew dissipating surfactants are more widely used now to prevent dew forming and, thus, the moisture freezing on the outer leaf. This can be a great help with lighter early season white frost. Although there is a cost here, it may well save an important revenue generating event that might otherwise be cancelled or delayed. They are effective and possibly the best option available.