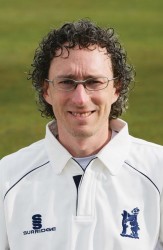 "I must be the luckiest guy there is. Since I was just fifteen, coming to work has meant Edgbaston. I progressed through the ranks to play as a county professional and, now that injury has forced a second retirement, I'm still coming here. Just great."

By today's standards of professional sportsmen, Tony Frost is an enigma. No flashy car, not one to court publicity or the headlines, just getting on with two jobs he adores.

His career path has led him from playing the game as a kid in a Staffordshire village - he spent early summers watching his dad, Ivan, play league cricket - to preparing pitches for the next generation of county cricketing wannabees.

He has no head for stats or facts and figures surrounding his career. When did you make your debut? "Don't know - er might have been Yorkshire." Did you score many runs? "Don't know." How many catches did you take? "Don't know."

Tony Frost is sitting high in the stands at Warwickshire's grand home on a fresh early autumn morning … and laughs at his lack of knowledge. "I really can't remember, sorry. I know it was twelve years ago and Pipes (Keith Piper), our wicketkeeper, was injured so I got my chance" His voice trails off, he laughs again. No, he really can't remember. (For the record, Tony, it was 1997 and you were awarded your county cap in 1999).

His career took him to the end of the 2006 season when injury took its toll and he decided to retire. That's when he decided "because I like the outdoors" to join the county's groundstaff. 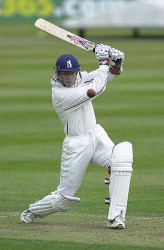 But, in the winter of 2007-08, with new Warwickshire Head of Cricket, Ashley Giles, wanting back up for wicketkeeper Tim Ambrose, who had been called into the England squad, there was a vacancy in the four day county matches for an opening bat ... that when Tony's phone rang.

"I know Tony was struggling through injury" said Ashley, "and couldn't keep wicket, except in an emergency. But he was an accomplished bat. He needed no persuading and helped us win promotion in a fantastic season - and stayed on for another summer."

"When he said he couldn't carry on into 2010 I tried unsuccessfully to persuade him to play on" said Ashley. "We'll miss him, that's for sure."

Tony was only eighteen when he was offered a contract at Edgbaston after playing for Staffordshire through all the age groups as a youngster. He was playing for under 18 teams when he was only eleven and became a wicketkeeper by accident.

"To be honest, I got bored fielding at fine leg, one day there was no wicketkeeper, so I volunteered and that was that. I liked keeping wicket because you're always involved - it keeps you interested."

He admits that, like goalkeepers, the crazier you are the better. It demands the same very high hand-eye coordination, agility and mental strength. "I guess you can say I'm nuts" he said.

Tony was also that sporting rarity who wore spectacles all the time. He couldn't wear contact lenses because he has naturally dry eyes. But it never hindered him - he even batted in spectacles.

But, like all wicketkeepers, he bears the scars and omnipresent pain of breaks - two pins in one finger, dislocations, a dodgy hip and three knee operations - all what he calls "par for the course" and routine for his profession.

His 'final' final season saw Warwickshire award him a benefit but, in recessionary times, he admits it's been hard. "I've gone for the smaller events rather than the lavish events. People simply haven't got the money they had, even a few years ago. But, I'm not complaining. I've done all I ever wanted to do and I'm still here."

He says giving up playing was a 'massive decision'. "I'm 34 in November - but the knees and the hip mean it's always been a struggle and you have to move on. I first chatted to Steve (Rouse), our head groundsman, about joining the grounds staff three years ago. I could never work in an office. I like cricket and other sports because you are always outside. That's me and that's what I want."

So, now it's another learning curve "watching the master at work" as he puts it, discovering how to do it, and when. 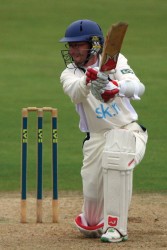 "It's complicated - more difficult that people think. It's not just sitting on a mower and making the ground look good. You have to learn to roll first, how to prepare the strip and even something simple like how to mark it out."

"But it's great and a real challenge. Before the West Indies one day game we had a lot of rain the day before - but not on the morning the game was due to start. But, that doesn't mean you can start on time. There's lots to do and learning from Steve and the boys - Mark, Rob, John, Dave, Paul and the other Rob) has been just great."

Tony looks every inch the part -straggling grey curls beneath a woolly hat that he fiddles into position all the time we are talking - zipped up waterproof top, tracksuit bottoms and battered trainers.

The whites have been put away for good and a new career has dawned - a career he is talking enthusiastically about.
"People just rock up to matches and expect everything to be perfect. Now I am getting enough knowledge to look at all aspects of the job and learn all the time. I know what Edgbaston pitches are like - there's something about this place - I love it ... second only to Lord's" he adds with a laugh.

His first priority is to become fully qualified through the ECB scheme. He is even considering taking a degree in his new career. But, Tony is keeping all his 'outdoor' options open, "I might even take up umpiring one day."

You can't talk first class cricket careers without finding out about Tony's best moments ... those that he remembers of course!

Best innings? "242 not out against Essex during my 'comeback' season."

Best he ever played with? "Brian Lara, Allan Donald and Shaun Pollock."

Best opponents? "Mark Ramprakash and Matthew Hayden - his 200 plus at Hampshire's old ground was the best innings I have ever seen."

The final word, as Tony heads off to help reseed the outdoor nets, which have taken a serious hammering from both bowlers run ups and the weather, is with former England spinner Ashley Giles. "Tony came back and did a fantastic job for us. I am truly sorry that he can't go on. I just hope, now, that he can help prepare some good tracks for us at Edgbaston. He did a terrific job for us with the bat and gloves - now he can do the same with the mower and the roller. But, I have the last word - always - as he knows!"