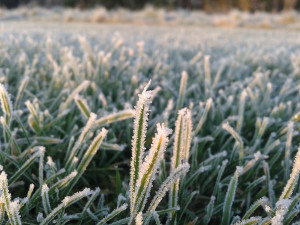 How many golf courses allow play on their greens during frosty conditions? In an ideal world, the answer would be none, but there are many golf clubs who do and, unfortunately, external pressures usually outweigh the knowledge of the greenkeeper ... and the needs of the grass!

There may be several reasons:

Damage to the greens

Turf is especially prone to damage when it is frozen, and also when the ground is thawing. Normal practice is for a course to remain closed until the ground has completely thawed, which is often not until mid morning and, in extreme cold snaps, not at all.

What happens to turf in frost conditions?

Frost on the grass leaf tells us that the water inside the leaves is frozen. Remember that approximately 80% of plant tissue is made up of water. When this water is frozen, foot traffic on the turf causes the ice crystals in the cells to puncture through the plant's cell walls, thereby killing plant tissue.

When frozen, the leaves of the turf get easily bruised by golfers' feet. After thawing, the affected turf turns black or brown and becomes sparse. The turf can often remain thin for long periods if damage occurs early in the winter. The fine turf on greens becomes more susceptible to disease and the putting surface very uneven.

More long-term damage can be caused when play takes place as the turf is thawing after a prolonged freeze. Under these conditions, the

top surface of the turf may be soft, but the underlying soil can still be frozen. Root damage occurs easily from a shearing action as the golfers' feet move the soft top surface against the frozen sub soil.

The process of damage to the turf normally occurs in the following pattern: 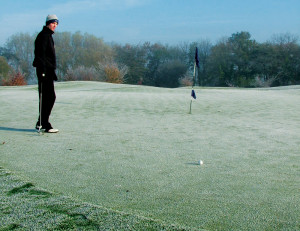 Keep off the grass

Every time you allow play on frosty greens, you continue to promote further turf decline. Low soil and air temperatures prevent any likelihood of the grass recovering.

Many golf clubs do operate a favourable frost policy, whereby a number of contingencies are put in place to reduce frost damage and allow golf to be played during frosty conditions.

Some of the methods employed include:

If the frost is a haw frost, it is likely that many of the greens will be playable by late morning once thawed. In most cases, frost damage will not be noticeable until the spring when long term damage has already occurred. A poor thin sward, a heavy, compacted green and a poor putting surface are all consequences of play being allowed on frosty courses.

The best policy is for the club to inform golfers of the reasons why greens need to be taken out of play and, in extreme frosts, why the course needs to be closed.

This can be done online via email and the club's website and, of course, the club notice board and newsletters.

Communicating the facts should help all golfers understand the longer term benefits for providing quality greens for the majority of the year. A handful of disgruntled members in the winter is a far better scenario than a mass exodus come the warmer weather!