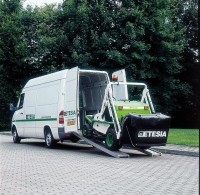 As petrol and diesel prices hit the headlines, Etesia are discovering that wise end users are now placing new requirements at the top of their grass cutting machinery wish-lists. "Fuel costs topping £5 a gallon have become a really important factor for end users to consider when pricing up contracts. This year the economy is hitting really hard and for many contractors fuel efficiency and low maintenance costs are now high priorities if they are to maintain a profitable business." says Les Malin, Etesia's UK General Manager, .

"Low running costs are just one reason why a number of customers have recently put in large repeat orders for our Hydro 124 ride-on rotaries. Etesia's domed-deck shape combined with their anti-clog cutting and collecting system means that the engine is never placed under strain, even on the first lush cut of the season," he explains. "An engine under load burns more fuel. Unlike other lawnmowers, Etesia's unique design means that the engine maintains a constant optimum 3600 rpm, even in tough conditions. As a result, fuel consumption is kept to a minimum."

He goes on to add that customers who opt for Etesia's recently launched range of Hydro 124 B30 Bio Diesel ride-on rotaries are gaining an even greater advantage, "Here end users are in a double-win situation - these eco-friendly machines not only provide fuel economy, they also have the benefit of eco-friendly low engine emissions. For end users who go down the route of producing their own bio-diesel there are even greater savings."

Powered by a 25hp water-cooled 3-cylinder Lombardini, all Etesia 124cm ride-ons have a top working speed of 16km/h, enabling them to do the job faster than others on the market - this mowing efficiency further increases their fuel economy.

After sales costs are another key factor influencing customers. "A machine that breaks down or is constantly in the workshop is not earning its keep - in fact it is very costly," says Les Malin, "Etesia prides itself on a reputation for reliability, long-life and cost effective low maintenance - our replacement parts must be the best value on the market!".

Contractors and end users wishing to make profit from grass cutting in 2008 should telephone Etesia on 01926 403319.