When Mick Reece first arrived at Kings Norton Golf Club, he could have been forgiven for harbouring some trepidation. The year was 1994, and the likeable 'Southerner' had just beaten off a host of other greenkeepers to land one of the premier golf course management positions in the West Midlands.

"I think there were a few slightly unimpressed locals at the time, wondering who's this bloke from down south taking one of our best jobs!" smiles Mick.

"I'd reached a point in my career where I knew my next move needed to be the 'right one' ... and, with a wife and children to support, I couldn't be moving halfway across the country unless it was going to be worth it."

With twenty years experience, following long spells at Abbotsley Golf Club in Cambridgeshire and Brickendon Grange Golf Club in Hertfordshire, Mick felt confident he could take on a bigger site, and Kings Norton gave him just the opportunity he had been waiting for.

Once installed, Mick and the club set about implementing a blueprint of long-term improvements to the course. Today, he finds himself almost at the end of his 'to do list', yet still as busy as ever! 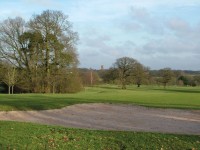 With 27 holes, a par 3 short course, extensive gardens and outdoor function areas to manage - not to mention twelve full-time staff, you'd probably expect him to concentrate his attention on day to day maintenance, whilst leaving any specialist work to outside contractors. And you'd be wrong as, from his earliest days at the club, Mick has always been keen to keep all works in-house.

"It's not that I'm against contractors per se, just simply that the cost savings of undertaking big projects can be substantial. With a large group of staff to keep busy through the winter, the idea of paying for additional labour to an outside contractor seems excessive - especially in these cash strapped times, so we always try to be self-sufficient when it comes to extra work."

The most recent of these big projects has been the full replacement of the out-dated irrigation system. As old as the golf course itself, the irrigation system had long been a thorn in Mick's side. However, with quotes coming in at circa £250,000, Mick's instinct for 'keeping it in-house' once again saw him and the team taking on the task.

"Cross the labour off the bill and factor in the cost of materials and, suddenly, a full replacement irrigation system starts to look more affordable," he reasons.

With the confidence and experience gained from taking on previous large-scale winter projects, Mick knew he had the expertise within his team to properly execute the job.

To keep things manageable, he and his long-time Deputy, Nick Bird, decided to split the replacement programme into two - which meant two loops of irrigation mains, separately installed across two winters. Under Nick's supervision, work started in October 2011.

"Initially, we thought we'd do well to lay 800m of pipe work per week," explains Nick. "Yet, once we got going, we found we could lay up to 1000m per week - the lads really set a cracking pace."

"Between October and December 2011, we replaced 3800m of pipe and cable, over 100 sprinkler heads and god knows how many connectors! That took care of fifteen greens and tees."

"Work on the second loop commenced this last October, and was due to be completed just before Christmas. That will account for the remaining thirteen greens and thirteen tees. Originally, we thought the full project might need to stretch over three winters, so to bring it in twelve months ahead of our anticipated schedule is really satisfying."

"With the hire of a trenching machine, all materials and sundries, the cost of the system actually came in at £175,000 - a £75,000 saving on the cheapest outside contractor price." 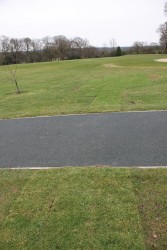 During the course of the work, Mick and his team had to overcome several 'interesting' problems. Probably the biggest of these was to find a way of laying irrigation pipes beneath the rubber crumb and tarmac pathways that criss-cross the golf course.

"The paths had been expensively installed (all in-house, of course!) just a couple of seasons earlier," recalls Mick, "so we had to figure out a method of installing pipe underneath them without resorting to cutting or digging them up."

A trawl of the internet turned up the 'Bullet' machine (hired at a cost of £400 per week), which literally fired a channel through the sub-soil at a depth of 750mm.
"These type of projects always throw you the odd curve-ball, so they do get the old grey matter working! For some of my younger lads it's a great opportunity to learn about things like soil types and drainage systems, whilst the ground is actually opened up to reveal what lies beneath."

Of course, what goes up, or in this case gets dug up, must always go back down. The majority of the pipelines were reinstated using 50:50 rootzone and turf from Teal Turf - a company Mick rates highly.

"I've used the company over a number of seasons now, and always found their turf to be of good quality, with delivery and back up to match."

Once the system is fully operational, all that Mick needs then is the appropriate weather to use it! At the time of writing (end November 2012), it seems difficult to imagine ever needing irrigation again, but we all know that things can change quickly when it comes to the UK climate.

During the course of our interview, I am keen to discover if Mick feels his job as a Course Manager has changed much since his arrival in the early nineties?
"It's changed massively, and not necessarily for the better I'm sorry to say. As a hands-on type of greenkeeper, I find it frustrating that I can spend anything up to three quarters of the week sat behind my desk. Whilst I do appreciate that being a Course Manager brings with it certain responsibilities, I'd say I'm always more content having spent a day working physically hard than a day spent writing and responding to never ending e-mails!"

"Also, golfers expectations have now evolved into golfers demands - so the pressures to achieve results are greater than ever."

However, one aspect of the job that is evolving for the better, in Mick's view, is the technical aspect of greenkeeping. For example, Mick is a big advocate of course assessment programmes, and works with Midlands Agronomist Paul Woodham (and an armoury of measuring tools) to collate statistical data.

"The days of relying on opinions are long gone. As well-paid professionals working at the top-end of a multi-million pound industry, we need to be able to back up our thoughts, ideas and gut instincts with measurable, recordable data. Put simply, how can we quantify and demonstrate things are improving unless we have measured them to begin with?"

Whilst some greenkeepers have reservations about work with an outside agronomist, Mick is quite relaxed about the situation at Kings Norton.

"A few years ago, we had a nightmare winter with disease, and I found having the backing of an agronomist helped me to better communicate what was happening to the membership. It's the old chestnut that committees are always more receptive to an outside voice than the opinion of the person whom they deal with day to day. Therefore, I view such involvement as a positive back-up mechanism rather than as the enemy within."

The nightmare year that Mick experienced has also led to a change of mindset regarding disease management. 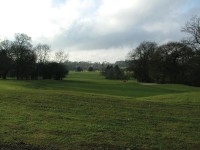 "For years I took the view that we would follow good cultural practices and cross our fingers with regard to disease - not jumping in and spraying fungicides just for the sake of it. But, invariably, we would always get a hit and then I would end up spraying anyway. Following one really bad outbreak of Fusarium, when I was genuinely concerned for my job, Nick and I re-evaluated our disease management policy and now spray preventatively, rather than reactively. To my mind, the modern fungicides - especially with the tank mix capabilities - are much better geared to this approach, so why wait for the horse to bolt before locking the door?"

That's a very honest appraisal of a subject, which some Course Managers might not be so keen to expand upon. But, in my experience, that is how Mick is - open, honest and usually smiling!

As we close our conversation, I ask if he might ever be tempted to move back south?

"No," he replies, without hesitation. "I'm happy in this part of the world, the people are friendly and I feel proud to be the custodian of this golf club's greatest asset - its golf course. And, besides, there's still plenty to do!"