0 Further Ipswich connections at The British Open at Royal Birkdale

Ransomes jacobsen, the Ipswich-based turf equipment manufacturer, supplied the fairway mowers used at Royal Birkdale by Chris Whittle and his greenkeeping team for The British Open. However, there was a further connection with the Suffolk town as two greenkeepers from Ipswich Golf Club made the 300-mile trip to the Open venue to help with the course preparation and maintenance during the tournament.

Chris Whittle has been using Jacobsen LF-3400 light fairway mowers for the past few years and these were supplemented by a further three from Ransomes Jacobsen's tournament support fleet during the prestigious event.

Ipswich Golf Club greens staff, Adrian Goode and Graham Brumpton, have extensive experience of the LF3400, using them regularly on their heathland course, situated on the eastern outskirts of Suffolk's county town. Paul Lawrence, the 1st Assistant at Royal Birkdale, began his career back 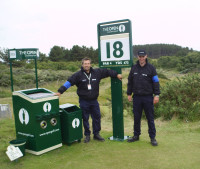 in 1982 with Adrian at the Ipswich club and he issued the invitation to his former colleagues to help at The Open.

"We spent eight days at Southport, from Sunday through to Sunday and although very tiring, it was thoroughly enjoyable," said Adrian Goode. "We were up at 3.15am for a 4.00am start and it took 3½ hours to get around all the fairways. We cut from tee to green, as stipulated by the R&A, using all four LF3400s and an LF4677 in a staggered formation. I was told we even appeared on the BBC's television coverage of the event. The machines behaved perfectly and we were complimented on the quality of the course, which was very rewarding.

"Once we'd completed the fairways we then got involved in divotting the fairways and tees and cleaning the crossing points around the course. It was a fantastic experience to be inside the ropes and rubbing shoulders with the world greats of golf. We must have done alright because Paul has invited us back for the Ladies Open in 2010."