Sportsturf contractor MJ Abbott Limited has gone 'back to school', at the site of a brand new build in Hertfordshire.

St Mary's Church of England High School in Cheshunt is moving to a new site half a mile south of its existing location. It is the first completely new secondary school to be built in the county for over 30 years. Its state-of-the-art facilities, which will cater for 1100 pupils, will include technology suites, a performing arts centre and an impressive sports complex.

MJ Abbott was awarded the sub contract in March by Shepherd Construction (South Division) for the construction of the natural and artificial pitches and a Multi Use Games Area (MUGA) at the school. The works consist of two football pitches, a rugby pitch, cricket pitch, an athletics track and a MUGA containing tennis and netball courts. The design of the works and consultation is being carried out by Gordon Jaaback. 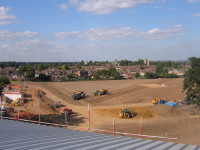 The works cover an area in excess of 6 hectares and include topsoil stripping, cutting and filling to form the pitches of some 40,000m³ of subsoil and topsoil re-spreading. Primary drainage will be installed to the formation areas incorporating lateral drains at 7 metre spacings. Secondary slit drainage systems will be installed during construction followed by sand grooving after establishment. Sand will be ameliorated into the indigenous topsoil to create free draining natural turf pitches.

The site is located in an environmentally-sensitive area in close proximity to the New River and next to protected woodland. One of the key challenges of the project has been to incorporate the arisings from the foundations from the school construction site, some 30,000m³, into the sports pitches.