Although probably the most well known cool-season turfgrass disease, fusarium patch is more accurately called Microdochium patch - a common name which is now becoming more widely used for this disease.

The reason is that fusarium patch disease is caused by the fungus Microdochium nivale and not by a Fusarium species of fungus at all. This same fungus, Mi 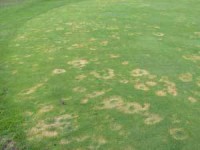 The very early symptoms of infection may go unnoticed as slightly paler patches of turf throughout the sward. As the disease begins to take hold, the first real signs of infection are small, water-soaked dark brown patches that rapidly fade to tan. As the patches increase in diameter from approximately 5 cm up to 25 cm, the dark water-soaked turf around their outer edges confirms that the disease is active.

The individual patches may coalesce and if left untreated, the damaged turf will be killed, leaving scars that may take many weeks to fill in. In extreme cases, the growth of the fungus may be apparent during the early morning as off-white mycelium on the surface of the turf around the edge of the damaged area. As the turf dries, the mycelium disappears.

Microdochium patch (= fusarium patch) disease can be seen all year round but will only develop under cool, wet conditions. The fungus that causes the disease survives unfavourable conditions by living saprophytically on dead and decaying organic matter.

Although initial infections may progress slowly and undetected, once the environmental conditions are favourable, the disease progresses quickly and damage to the sward can develop at an alarming rate. The fungus is not killed by frost but its growth may be temporarily suspended. Spread of the disease most likely occurs via the countless number of spores that are produced on the affected leaf surfaces during cool weather.

All fungicides that are currently available for use have shown efficacy against this turf disease and can be used as part of an integrated programme to manage Microdochium patch. Always ensure that the disease is correctly identified prior to the application of any plant protection product.