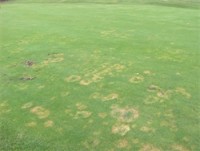 One of the most common, damaging and disfiguring diseases to be seen on turf, particularly on bowling and golf greens, during the winter months is Fusarium patch (Microdochium nivale)


Fusarium patch is often seen when cool, wet weather and moist surfaces persist. The pathogen can be active across a broad range of cooler temperatures.

Identification of the disease is relatively easy, with the turf grass having irregular tan/orange coloured spots of damaged or necrotic grass, varying in size (20-35mm) with a pale pink/white colour mycelium.

Initial symptoms are seen as small brown spots, which will rapidly enlarge and cause scarring of the turf when conditions are favourable. These scars will be difficult to heal and repair during the winter months, so early recognition and treatment is important to reduce scarring of the turf surface.

Poa is the most commonly attacked, however, this grass is able to recover easily because of its seed bank presence in the soil.

Spores can remain viable for up to two years and survive temperature as low as 20°C. They are spread by wind, water, and by traffic. These spores germinate into mycelia, infecting new plant tissue (pale pink and white mycelium), which can be seen around the edge of the patches, indicating that the disease is active.

In severe infections, the fungus may penetrate as far as the crown, but will usually not kill the plant. If the plant does die, it is more likely from subsequent winter injury or another cause. Infected turf will recover when the plant becomes more active in the spring and is able to produce new healthy leaves, restoring its vigour and colour.

The fungal pathogen has a disease life-cycle, which continues when conditions are favourable. Understanding this cycle will enable you to control the pathogen by effective management to break the cycle of disease.

Keeping the sward healthy, and reducing the conditions that favour this disease should be the first priority:
• Carry out programmes of aeration to help keep the surface free draining
• Inspect and monitor existing surface water drainage systems, ensure that they are working
• Prevent moist conditions remaining on the surface by brushing or switching the playing surface (remove dew)
• Apply a balanced fertiliser low in Nitrogen (less than 3-4%) to keep the sward healthy (a soil analysis will identify fertiliser requirements)
• Control thatch layers, as thatch provides a good environment for the disease
• Reduce the return of clippings.
• Maintain Soil pH between 5.8-6.5 do not allow the soil to become alkaline
• Be vigilant and treat the disease early to prevent severe attacks