Extensive research conducted by the STRI on behalf of Headland Amenity shows that the threat of fusarium attack can be dramatically reduced by applying a tank mix of Throttle, the company's translaminar and systemic fungicide and TeMag HPE, Headland's chelated iron and micronutrient product with harpin protein.

Trials over the last two years have produced results tabling a rapid decrease in soil infection from the disease following applications in the autumn, and importantly very little increase from the following January to May.

Mark De'Ath, Headland's Operations Director says that the management of fusarium should never be reliant on fungicides alone, and the combination of Throttle which is both a preventative and curative treatment, alongside TeMag HPE both fights the establishment of the disease and strengthens the plant to ward off attack.

"Fusarium has the potential to establish a high population from early October to mid November," he explains. "If it does so then achieving control exclusively through the use of fungicide is both difficult and expensive. The aim should be to prevent establishment at the outset." 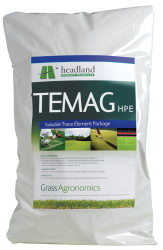 Andrew Howarth, Golf Course and Estate Manager at Hanbury Manor Golf and Country Club is one course manager taking this approach. "I like to get to fusarium before it gets to us," he says. "I find that the two products (Throttle and TeMag HPE) used together balance out nutritional levels, boosting health and encouraging the grass plant to take in the fungicide."