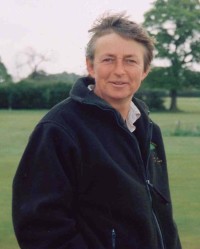 With lady greenkeepers thin on the ground (BIGGA have a mere sixteen on their books out of over 6,000 members), lady Head Greenkeepers are a very rare species indeed.

Trying to find one to interview was like looking for a needle in a haystack so, imagine my delight, when Pitchcare not only tracked one down, but found her working at The Forest of Galtres Golf Club, Skelton, York, which is practically a stone's throw from my home in North Yorkshire. That said, having arrived to talk to her, I was in for a surprise.

"Although I'm a greenkeeper I originally trained as a gardener," says Marian Softley, in charge of 120 acres of golf course catering for over 300 members and pay and play golfers throughout the year. Relaxed and joking with her three male members of staff, Marian introduces them all. Carl Pallister, her deputy, who has been greenkeeping since he left school, started here in 1996 and is currently working for his NVQ level 3, Assistant Greenkeeper, Shaun Pallister, (Carl's brother) who is renowned for being a 'natural' when it comes to mowing a straight line, and Nick Callaghan, the newest member of the team, a trainee greenkeeper who is also a qualified mechanic.

Marian became involved with the Forest of Galtres Golf Club because she had always gardened for the owner, Geoff Procter. "Geoff is a very successful arable farmer who, at the age of seventy, decided to diversify into golf and use some of his land to build a golf course," Marian explains.

"Being a keen golfer he approached the project with relish. He was interested in the construction and the layout, and enjoyed it hugely," she continues. Marian remembers being taken round the site and shown a field of barley which, Geoff exclaimed, was to become the 17th fairway. The course was designed by internationally renowned golf course architect, Simon Gidman, who created the greens, tees and surrounds on huge mounds.

"It's quite a bold design," Marian continues. "Here in the Vale of York the land tends to be flat and the mounds create a striking visual impact. On a clear day, from the 2nd tee, you can see York Minster in one direction and the White Horse carved into Sutton Bank leading up to the North Yorkshire Moors on the other."

The first nine holes of the course opened in 1992, with the second nine following two years later. Initially, Marian, having been involved in the construction, continued gardening but worked on the course part time. "We had a set of trailled gangs and employed a man with a tractor who took two days to cut the grass," she remembers. In 1993 Michael, a young Head Greenkeeper from Ganton, was appointed and led the team for two years until his marriage, after which he left to join his father-in-law's business. Michael was followed by Mark Jones.

"Sadly, Mark became very ill from cancer," Marian explains "and, when he died in 1998, Geoff decided not to replace him but take on the role himself." Gradually, over the years Marian, who has been with the course since its inception and has now gained over fifteen years experience, became the link between Geoff and his staff. "If there were any problems with machinery, for example, I'd tell him and he'd deal with it," she says. "Since he's become older, I've taken on more and more responsibility."

Driving into a head wind for a tour of the course, I suspect that Marian is far more skilled than she admits. "We do the usual things," she says airily when asked about the maintenance programme. "We follow a minimal fertiliser policy and lightly feed the greens about three times a year, once at the end of April, another in July and a third in the autumn.

During the growing season, we verticut them every fortnight and topdress monthly. We don't put anything on the fairways, but hire a contractor to spray them and the semi rough once a year with selective herbicide. We aim to keep the use of herbicides and pesticides to an absolute minimum."

Once part of the Forest of Galtres, which is mentioned in the Domesday Book, the club is blessed with ancient oaks, which could be anything up to 150 years old. These have been augmented by indigenous plantings of new trees. "We've literally planted thousands and thousands of trees," Marian continues, "mainly oak, ash, silver birch and crab apple. In a few years time the young plantations will produce wonderful canopies."

Meanwhile, the three lakes (two of which provide irrigation) are lined with bulrushes, soon to be followed by yellow flag irises, the gorse is in flower; and the driving range ball washer is out of action until the robins, who have made it their nest, no longer need it! Marian talks of the hares, deer and geese that are constantly sighted and the view. "I love it," she says, "you wouldn't know that we're so close to the A19. Every day here fills me with pleasure. Yesterday, we had black storm clouds behind the brilliant greens of the trees. It was spectacular." 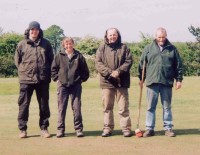 At 6,167 yards off the yellow tees the course is not long, but has more than enough natural hazards, bunkers and water to make it a challenge for golfers of all abilities. All but two of the USGA greens are protected by bunkers. A computerised pop-up irrigation system services the tees and greens.

Asked about being a woman in charge of a male crew, Marian says there is no hierarchy and everything gets done. Small, wiry and brown as a berry she walks the course with a surety that gives her staff, I suspect, no choice but to follow. Dissent seems as unlikely as autumn following winter and summer preceding spring.

As we stop to take photographs a satisfied customer calls over, "I've played at three other golf clubs in the area and this is in far better condition and better designed than any of them," he says. 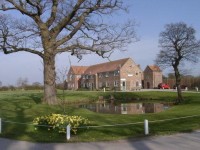 The Forest of Galtres Golf Course might be maintained under a slightly unconventional management style but, clearly, Marian and her staff of three approach their work in a purely professional manner.

Perhaps it is her gardening background that allows Marian to tend the course with a 'soft' touch, or maybe it is simply her feminine sensitivity.

She goes home to revert to her profession as a gardener, sharing a half acre plot with her neighbour and growing fruit, vegetables, shrubs (not much grass) and tending the Gloucester Old Spot pig who has just given birth to twelve piglets. As we part at the clubhouse I notice the water lilies growing in the adjacent pond. "I borrowed them from Geoff's garden," she says. "By the way, we've got a new man starting next week. He's a qualified greenkeeper but he's also just gained a degree in Environmental Science."

It's a clear statement of intent by a club that takes the environment seriously. I think he'll fit in just fine.