by Charmian Robinson
in Local Authority
on 16 May 2010

Sometimes it takes a small degree of inspiration, a whole lot of hard work and dedication and the foresight of an enlightened council to make a massive difference to what can seem an insurmountable problem.

Charmian Robinson went to find out how one pioneering council reduced the number of matches called off by investing in a Pitch Rejuvenation Programme. 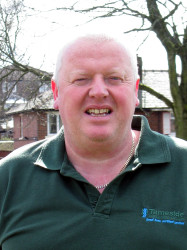 When it comes to local authority pitches, a significant part of the problem is the nature of the resources available to those that manage them. Playing surfaces have to accommodate a relentless turnover of games at many different levels of play. The STRI recommends a play rate of 2.65 matches a week per pitch, but Tameside Metropolitan Borough Council struggled to get anywhere near this. The number of pitches out of action due to poor conditions in 2005 meant that almost a third of matches were called off, causing frustration for local teams and the council's groundstaff.

Tameside is a metropolitan borough of Greater Manchester, comprising nine towns with a collective population of 214,000.

The challenges of maintaining these public areas are plentiful. None of the fields are fenced off, so access is constant and sometimes unmonitored. Footfall from dog walkers, pushchairs, bikes and vehicles in all weather conditions inevitably takes its toll on areas already worn and under stress from the intensive fixture schedule.

Paul Eccles is Operations Supervisor for Tameside. For the past ten years he has been responsible for the procurement and implementation of equipment for the maintenance of the outdoor sports facilities. Recognising that the quality of the pitches in his area were like most other council pitches; in very poor repair after suffering years of neglect with little if any maintenance other than grass cutting and rolling, he took the decision to depart from historical practices to implement a new approach to pitch maintenance, aimed at achieving an annual increase of 1600 matches across the sixty-eight pitches. 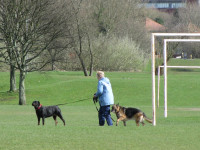 Five years ago, Paul decided to tackle the problem from the top. He knew that there were a number of fundamental issues that had to be addressed, but the most important was investment. It was the personal passion and drive of Councillor David Sweeton, Project Head for Sport and Leisure, that was instrumental to the council allocating substantial funds to the sector. Councillor Sweeton personally championed the benefits of introducing good working practices to provide long term improvements, not just to the condition of the pitches but in the quality and enjoyment of the actual games played. Support at the highest level was forthcoming and a budget of a £¼ million was set aside for a three year project to cover the necessary investment in machinery and training.

Armed with the means to make improvements, Paul's next decision was to prove inspirational as well as enlightening. "I needed information before I randomly purchased equipment," he explained. "My priority was to investigate how to tackle what was a major recovery mission for sixty-eight working pitches suffering from being constantly out of use in an area renowned for being one of the wettest, yet also with the most unpredictable weather patterns in the UK." 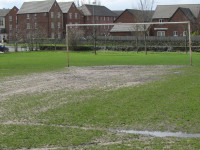 Knowledge is always the key and, to gain insight, Paul sought expert opinion. He chose to attend an Open Demonstration Day on total pitch renovation organised by Macclesfield-based Campey Turf Care Systems. These regular events, staged around the country, are educational workshops open to any groundcare professional looking to find out more about the latest turf machinery and maintenance techniques. "We are trying to provide an open forum for demonstration and discussion," said Managing Director, Richard Campey. "Our aim is to promote best practice and to literally demonstrate how even small changes to working patterns can have a dramatic effect on how a sports pitch copes with, and recovers from, constant use and adverse weather conditions. It is not about spending a fortune; it's about opening your mind to a few new possibilities which can make all the difference."

For Paul, the demo day was a watershed. It rapidly became clear that pitch maintenance was not about a single machine or action. It was about adopting a 'Pitch Management System', a planned maintenance programme that could be adapted on various different levels according to budget and capital investment capabilities. "The demonstration vividly illustrated the causes and effects of play on the surfaces. The solutions offered were measured, intelligent responses gained from years of experience tackling the very problems that I encounter every day. What was truly encouraging was the fact that even a small change in working practice could make a huge improvement. I found the whole experience incredibly motivating, and felt even more convinced that adopting the recommendations would be incredibly beneficial to Tameside." 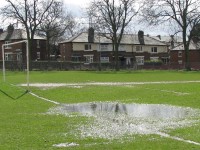 ollowing the event, Paul immediately instigated a pitch rejuvenation programme based on what he had seen. His team of groundstaff began work to address the main two issues of severe compaction and waterlogging using an Imants Rotoknife for linear slitting, followed by the Imants Shockwave for deep revitalising decompaction and the Verti-drainer for vertical slitting.

Effective aeration can be achieved very easily. Conventional soil aeration in isolation risks being too localised in action. Hollow coring, verti-draining, conventional slitting and solid tining are localised, affecting the area immediately around the tine, whereas the effect of both the Shockwave and the Rotoknife is to install inter-communicating pathways through the rootzone, linking all areas of it together. This enables the transfer of air and water to work at the optimum throughout the whole rootzone, and also allows the uniform spread of organic agents which can promote the healthy development of all the plants occupying the treated soil.

The programme put in place at Tameside now takes a more progressive view, that it is best to control thatch with an ongoing policy than to allow it to accumulate then try to remove it. 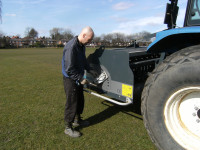 Paul's team work the pitches in sequence using the Rotoknife slitter aerator to slice into the pitch surface down to 150mm. The aim is to carry out this process at least three times a year per pitch. By constantly slitting the integrity of the thatch is compromised, allowing air and water to pass through.

Each year, all pitches are 'shockwaved' over the entire playing surface to remove surface water and revitalise heavy wear areas. The machine's linear action, operating at depths of 120mm - 260mm, creates lateral pathways for movement of water between the existing drainage lines. Those pitches which are most intensively used receive a second treatment through the full length of the pitch to the width of the 18 yard box.

The third pass in the sequence, to fully aerate the pitches, is to use the Vertidrain. "Although we would like to use the Vertidrain on all the pitches, we are restricted due to debris in the soil," explained Paul. "Only 40% of our pitches can actually tolerate the full vertical decompaction, but it is such an excellent procedure. I continue to use it wherever we can, at least three or for times a year. The Shockwave is simply more robust and can better cope with the debris."

A budget of £25,000 is allocated alone to providing the 40 tonnes of sand which is applied to each pitch annually by the council's Dakota 414 spreader. High quality perennial ryegrass seed is then sown using a Vredo seeder, which has significantly increased the quality and durability of the playing surfaces.

"Another, perhaps surprising, consequence of using mechanical methods to improve soil conditions is a reduction in the use of fertilisers and soil treatments to aid growth," said Paul. "On our better pitches we employ the Koro Recycling Dresser to aerate the fine top layer in a more environmentally-friendly way. It removes the soil and re-spreads it as a dressing. A mixed homogeneous top layer has fewer dehydration problems, encourages biological activity and is less prone to disease and pests."

"What we have come to understand is the importance of varying types of aeration and decompaction in producing good playable pitches with strong, healthy grass swards that recover quickly from wear and tear and drain rapidly and efficiently," Paul declared. "The smallest improvements in these areas of maintenance can make significant differences overall. Even local authorities on much smaller budgets than ours can benefit by a change in approach. I would welcome anyone wanting to take a look at the way we operate to visit, to see how they can adopt similar methods at their facilities." 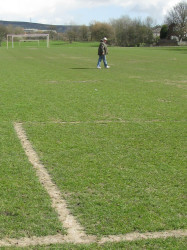 "Over the past few months of harsh winter weather, we have consistently been able to play on pitches which, in previous years, would have been called off. The number of pitches that have remained in use has risen significantly and, if any justification was needed for the council's investment, that speaks for itself. In addition, my team and I have renewed enthusiasm for our work and we're motivated to continue our programme of improvements."

"Too often, in local authorities, it's a fact that the basic training and understanding is lacking. What I would dearly love to see is a national standard for local authority pitches for us all to aspire to. We need a benchmark to strive for and, possibly, an outside organisation or advisory body to provide advice and recommendations. In the meantime, we have to be grateful to those manufacturers and suppliers in the industry willing to encourage others to raise standards in a realistic and practicable way."

"We are continually learning and adapting in the way we manage the pitches," he concluded. "For example, when goalposts are removed out of season, youngsters reinstate them in the time-honoured fashion with makeshift posts in the usual goal areas. We now place goal posts on the side perimeters out of season, just to encourage the kids to play on areas less prone to destruction."

"We are hoping to receive a further three years of funding to enable the programme to continue."