by Steve Mitchell
in Battery/Electric Power, Machinery & Mechanics, and Golf
on 17 Feb 2020

One of the world's top 80 courses, Ganton Golf Club in the Vale of Pickering ranks among the very best of Britain's inland courses. It has played host to many amateur and professional tournaments, including the Walker Cup in 2003 - so joining Royal Birkdale, The Honourable Company of Edinburgh Golfers at Muirfield and Royal Lytham & St Annes as one of only four venues to have also staged the Curtis Cup and Ryder Cup matches. 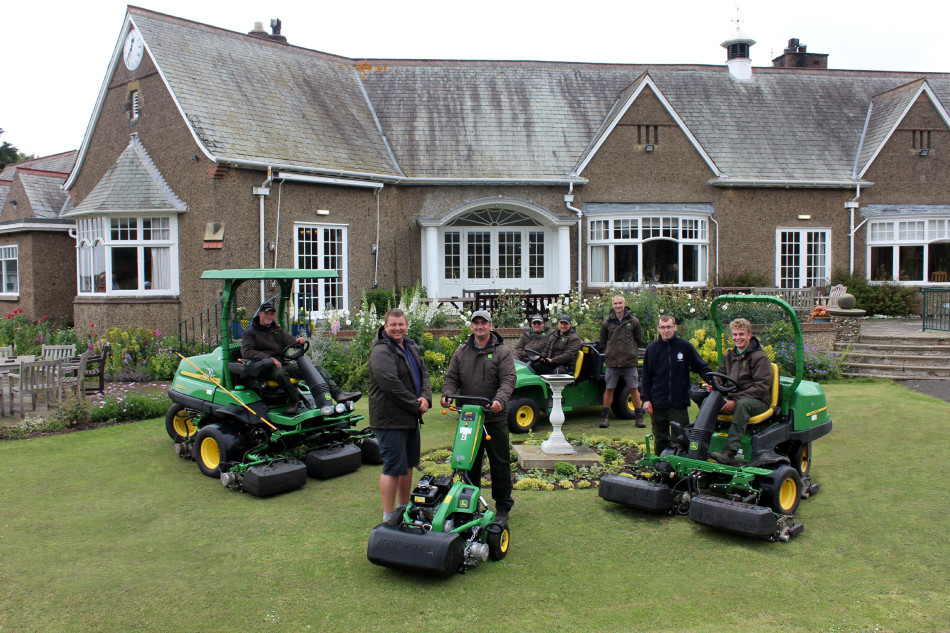 Ganton will also be hosting an England v France International Match in May this year, and is scheduled to host the English Men's Open Amateur Stroke Play Championship for the Brabazon Trophy and also the R&A Womens and Girls Home Internationals in 2021. The sandy, gently undulating site was once a North Sea inlet, so it has all the characteristics of both a links and a heathland course. Another striking feature is over 100 bunkers, some huge in size.

Head Greenkeeper Andrew West says he has always had a vision of opening up more areas of the course to give it more of a links feel, and he is now beginning to achieve this more effectively since the club invested in a new set of John Deere hybrid electric E-Cut mowers. These were supplied by dealer F G Adamson & Son on a five-year finance lease deal with annual repayments from John Deere Financial.

"We've got some very challenging undulations here and around two hectares of aprons and collars altogether, which really can't be managed with triples," Andrew explains. "But with quite a low height of cut required at 7mm on these areas during the playing season, this was proving difficult to achieve with our previous five-gang mowers and we were always struggling to hold the cuts.

"However, I always felt we could do this job better and in a reasonable time frame with the right machine, so we spoke to our course consultant Gordon Irvine and he really influenced our thinking. Both he and the STRI's head of agronomy Alistair Beggs encouraged us to consider following Royal Birkdale's example, noting improvements to the course presentation and finish and complimenting the contribution John Deere's 8000AE PrecisionCut fairway mower had made there."

Following an extensive review and evaluation of the different manufacturers' machines, the club opted for a John Deere package deal from Adamsons and the new hybrid mower fleet now includes two 8000AEs as well as two 2500E triplex and three 220E walk-behind greens mowers. These were joined by a 4049R compact tractor with front loader, two HPX diesel and two TE electric Gator utility vehicles, as well as a Charterhouse Verti-Drain 7416 aerator and top dresser.

"The whole team was involved in the process and John Deere scored the best in our view," says Andrew. "In addition to all the course demonstrations that Adamsons organised, we visited Royal Birkdale and spoke to friends and other contacts in the industry, to see what they thought.

"The club rightly expects us to be accountable for our decisions, and to see improvements as a result of the investment in any new machinery. Reliable dealer service and parts support has to be there too, and knowing this was behind the deal also made our final decision easier."

Another important element of the deal for Andrew and his team was the effort made by John Deere and Adamsons to deliver the quality of finish the club was looking for, as well as provide full training to the greens and workshop staff.

"Machine optimisation was the key focus, working closely and extensively with the club to identify the right machines and set them up exactly the way they wanted them by trying out different specifications and configurations," says John Deere territory manager Marcus Morris. "Together with the dealership, we try our hardest to do what the customer needs and deliver on our promises."

"The finance deal really helped a lot too," says Andrew West. "Ganton has traditionally bought all its equipment outright, but this has probably held the club back from adopting the latest technology, and we're really keeping up with the times now. For any club it's amazing what John Deere Financial can do - this deal helped us to buy a JCB digger and the Verti-Drain. It was an extremely cost-effective way of purchasing our new equipment.

"I'm also convinced we're saving money using the new E-Cut hybrid electric mowers, which provide both fuel savings and reduced noise levels. Overall, you can have the best agronomic advice in the world, but if you haven't got the right equipment with the latest technology, it doesn't necessarily work. Having started the process, I believe there's a good future for John Deere at this club."