by External source
in Conservation & Ecology
on 06 Nov 2014

Common birds such as sparrows, starlings and skylarks are suffering "alarming" declines in their numbers, a new study has warned. Figures from bird monitoring schemes suggest that populations of the most widespread species have dropped by around 421 million across Europe since 1980. Conservation experts blame increasing levels of fragmentation and urbanisation of the countryside for the huge losses. 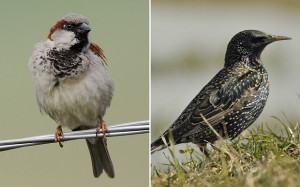 They warn that although the 144 species studied in the new report are considered to be common, and are still regularly seen in many parts of Britain, the new findings show they are at still at risk.

Among the worst hit species are house sparrows that have declined by around 150 million birds in the past 30 years while starlings have seen their numbers fall by 45 million. Skylarks, whose distinctive song has inspired poems by William Wordsworth and Percy Bysshe Shelley, have declined by 37 million and willow warblers have dropped by 34 million.

Dr Richard Inger, an ecologist at the University of Exeter who led the study, said: "The vast majority of the declines are caused by losses in the most common species which are often forgotten about in terms of conservation. We should all be worried that the most common species of bird are declining rapidly because it is this group of birds that people benefit from the most. Birds have key roles in ecosystems for things like pest control, seed dispersal and carcass removal. Do we really want to lose bird song to watching birds feed in your garden?"

The study, which is published in the journal Ecology Letters, used data gathered from 25 countries as part of the pan-European Common Bird Monitoring Scheme over a 30 year period from 1980. It examined the numbers of 144 species of common birds. While overall these bird species appear to be declining, some have shown an increase in numbers.

Blackcaps, robins, blue tits, blackbirds and chiffchaffs were all found to be increasing in numbers. Less common species like marsh harriers, ravens, buzzards, white storks and stone curlews were also shown to have increased in recent years.

Many of these birds are legally protected in the European Union and have benefited from conservation projects aimed at increasing their numbers.

For the full article from The Telegraph click here.