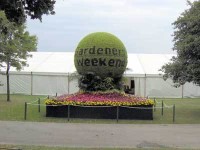 Staff at Kings Heath Park Birmingham have been very busy preparing for this years Gardeners' Weekend. Staff from the Council's own nurseries have been putting the finishing touches to their main floral display, depicting the role of the Spitfire in the Second World War. The plane is made up from an assortment of floral bedding materials and takes pride of place in the main floral marquee.

The event has now been running for several years and now attracts well over 15,000 people a day. It is definitely a show for the whole family with something for everyone.

There are also many plant traders/nurseries at the show selling a wide range of plant material, ranging from, annuals, perennials, indoor/outdoor materials, trees and shrubs. I have attended the show myself in the past and have always been inspired by how much plant material is on show. Nearly everyone who attends the show tends to take something home with them.

The show takes place this weekend, Saturday 3rd and Sunday 4th September at Kings Heath Park, Kings Heath, Birmingham. The show begins at 10.am and closes at 6.pm.

To book advance tickets
For your convenience tickets can be booked by phone or online or in person:

By phone
For information or tickets 0121 767 4141
(open daily Mon - Fri 8am - 8pm, weekends 10am - 5pm)
Telephone bookings can be taken up to 8pm on Friday 2 September - tickets purchased later than the last posting date of Wednesday 31 August will be available for collection at the Vicarage Road entrance to the show. There will be a fee of £1.50 per transaction. 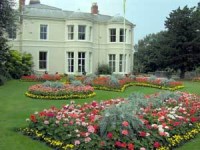 IN 1911 Kings Heath Park became part of City's Parks Department and the house was used as an administrative centre.

From 1911 to 1939 the park flourished and was maintained by a highly skilled team of gardeners who looked after the following facilities: 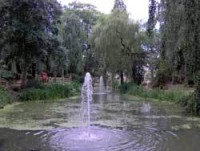 During the 1930s the park was used extensively by families for days out particularly at weekends and Bank Holidays. There was even a tea room which was run by two spinster ladies in the house until 1950.

After the war there was a major effort towards self sufficiency. This was combined with a major skills shortage, because many of the highly skilled gardeners had gone to work in industry, this prompted the local authority to train gardeners.

On 3rd March 1953, Birmingham Council decided to develop the site as the School of Horticultural Training at Kings Heath House. It is amazing that 40 years on the building was again used for educational purposes.

In the early days attending the Training School was a very formal affair, with gardeners attending dressed in suits. Training was intensive and the centre quickly gained a reputation nationally for encouraging students to develop their skills.

The training involved attending a 5 year apprenticeship scheme, with some students going on to attend full time college courses with Pershore College of Horticulture nr. Worcester.

Apart from attending the centre one day per week students would develop their skills working in local parks in Birmingham.

For over 50 years Horticultural Training has been carried out at Kings Heath Park. Since 1995 a partnership with Pershore and Bournville Colleges has enabled the centre to develop a more diverse range of courses both professionally and for the amateur. This has meant that even today the school of horticulture is at the cutting edge of horticultural training.