0 Gator to the rescue 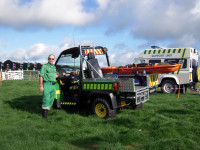 John Deere dealer Henry Armer & Son of Ulverston in Cumbria has supplied a new XUV Gator utility vehicle to St John Ambulance in Carlisle, for use as a first response all-terrain ambulance.

The specially converted Gator is now being used at race meetings, music festivals, shows, motorcycle scrambles and trials, and a range of other sporting events. It is fitted with everything needed to provide a quick response in difficult or awkward off-road conditions, including a radio, two types of stretcher, a defibrillator, oxygen, emergency lights and siren, and other life-saving equipment.

St John Ambulance volunteers can attend to casualties and extract them from virtually any situation because of the Gator's agility and true four-wheel drive performance. The machine is also road homologated so that it can liaise with an ambulance on the road after recovering the casualty, if necessary.

The Gator features a specially manufactured aluminium alloy bed that includes an extra seat, and the dealer has made a couple of other small safety modifications - for example to prevent the load bed from tipping - but otherwise it is a standard XUV model. Additional rear work lights have been fitted to illuminate the bed when required, and the vehicle can carry up to four people comfortably and safely within the overall payload.

"This is the first Gator that St John Ambulance has bought," says County Commissioner of Operations Reg Wilkinson. "Having identified the need for a vehicle that was capable of providing a fast response in off-road and wet, muddy conditions, we had one on loan from Armers last year. It did the job so well we decided to buy one, and have it converted to our specifications.

"The cab has a windscreen fitted, but not the optional doors, as this makes it easier to get in and out of the Gator quickly in an emergency. Because of its compact size and light weight, it can get through public access or tented areas for example with no problem, and it's very impressive in muddy conditions, particularly as it doesn't make a mess of the ground or leave ruts behind like other 4x4 vehicles.

"We've already attended a number of events with the new Gator this year and it's worked brilliantly, it's really exceeded our expectations," adds Reg Wilkinson. "It really came into its own at this summer's Kendal Calling music festival, where it did 30 hours over three days. The St John Ambulance staff attended 37 incidents with the Gator, treated 10 people at the scene, and transported the rest back to the on-site medical centre for treatment or onward referral. It worked so well, we'll be looking to hire a second machine for next year's event."