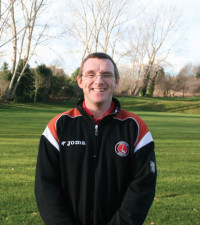 Paul Geary has been Head Groundsman at the Charlton Athletic's training ground since 1994 and, in recent years, has played an important role in the development and upgrading of the playing surfaces at the facility.

Paul is responsible for overseeing all the works carried out, which includes end of season renovations, drainage works and ground improvements, together with the normal, ongoing maintenance schedules.

The training ground provides both natural and artificial playing surfaces. These include eight full size and two smaller natural grass pitches and one 6000m2 3G artificial pitch. The grass pitches were sown down on various indigenous soil types from a sandy loam to heavy clay.

Including Paul, there are four staff who maintain the facility. His deputy is Darren Jepson who joined the team last year, and who is nearing completion of an FdSc in Sportsturf. They are assisted by Tony Provan, who has been with the club since 2000 and Alf Bloomfield, who joined in 1998.

The attitude of the grounds department is one of continuous improvement, both in personal development through education and also by raising standards in the field.

To that end Paul completed an MSc in Sports Surface Technology at Cranfield University in 2005, and has already implemented some of things he learned, particularly soil sampling and management. This has lead to improved standards on the site.

In addition, adjacent land was purchased to construct another training pitch and a small sided games area at a cost of £100 000. The 3G artifical pitch cost £600,000 and was provided by Barclays Spaces for Sport Aid in 2006.

Paul takes up the story.

"With over 1200 sessions/games completed between July 2007 and May 2008, plus the fact that the grounds are in use seven days a week, it is not surprising they suffer from a fair deal of wear and tear throughout the year.

Compaction and soil pans develop within the soil profile, this problem is exacerbated during the winter period when rainfall rates exceed the infiltration rate of the soil.

Our aim, of course, is to prepare safe, level playing surfaces, which can be difficult with inappropriate soil conditions.

Utilising different forms of aeration throughout the year is critical in terms of management of these on-going challenges. Developing technology has seen the introduction of the Gwazae, a tractor-drawn air-injection system that we trialled at the ground. This machine is capable of injecting 150psi to a depth of 710mm to break-up compacted soil layers.

I was impressed with the concept and would like to consider the use of the machine to alleviate the surface water ponding problems we usually have during the winter period on the heavier soil pitches. However, working this into a restrictive budget could prove difficult.

We aerate on a two to three week cycle using solid, needles, slit, hollows and linear tines. It is critical to keep the profile open as much as possible to reduce surface water, encourage root development and combat drought stress in summer.

Seed rates were increased last year from 35g/m2 up to 50g/m2. This has been particularly successful and has reduced the amount of repair work and settlement required following use. This will continue, funds permitting.

Turfgrass selection is vitally important to the visual appearance and the playing performance of the turf. We are constantly reviewing the grass seed variety league tables in the Turf Seed booklet produced by the STRI.

I'm not adverse to trialling products however, in the main I tend to use a combination of Perennial Ryegrasses (Lolium perenne) except for designated warm-up areas where we are trialing Rhizomatous Tall Fescue (RTF). I think this could prove extremely beneficial for future renovations due to its ability to withstand drought and waterlogging through its extensive root system. Recognising that plant establishment is difficult within a sand-slit drainage system makes RTF a consideration.

Ten years ago this wouldn't have been such an issue, with scarification being the norm but, since the introduction of the Koro Field Topmaker and fraise mowing as a matter of course, Poa is controlled more effectively improving wear tolerance and surface playability.

We have managed to make some savings by undertaking much of the work ourselves, by carrying out scarification, overseeding and hollow coring.
When scarifying, I prefer to use a 70/30 rootzone mix as I feel it fills divots and depressions more effectively than sand but, due to cost implications, sand will be used in conjunction with an intense hollow coring programme to increase soil content at the surface. An average renovation would take 600 tonnes of dressing, applied over the whole site. This year this quantity has been reduced to 260 tonnes.

The pitches will be mown down to 25mm, verticut/scarified in 3-4 passes using a Sisis quadraplay and vee-mower. 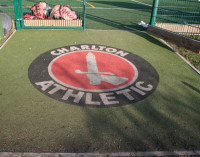 Depending on the condition of each pitch they will then either be hollow cored or solid tined to relieve compaction. We hollow core to a depth of 75mm-100mm with a vertical plunge type action machine, recycle the cores back into the pitch surface and ameliorate with topdressing and work until a level-playing surface is achieved.

We then vertidrain to relieve deep-seated compaction to a depth of no less than 200mm plus a 10% heave. 6:9:6 NPK preseed fertiliser is applied within seven days of overseeding, followed by a dressing of sand. Between 40-60 tonnes is applied based on criteria that dictate priority i.e, health and safety of the players, usage levels.

Finally we will overseeded with Advanta MM60 at a rate of 35g/m2 using a combination of disc and dimple seeders.

With such a small window of opportunity there is not a lot of room for error. It is usually the weather that dictates the germination and recovery rates of the pitches renovated. Even with the budget cutbacks I am confident that my team and I can achieve good results.

I think that the way facilities are used should be a consideration in the FA coaching badges. Pitch rotation, fitness work and goalkeeping are all issues that can be discussed at all levels with the ultimate conclusion being to improve facilities at a national level. However, this can be subjective at professional football clubs, with favourite areas being utilised by the football management team. Working with the FA in this manner could further improve attitudes towards sportsturf management and recognise the importance of the role and results of the groundstaff."

Whilst Paul has concerns about the cutbacks he realises that his experience at the training ground, plus his team's abilities, will play a key part in pitch management until the club return to the Premiership, where a high level of pitch maintenance is considered a prerequisite of a successful football club.