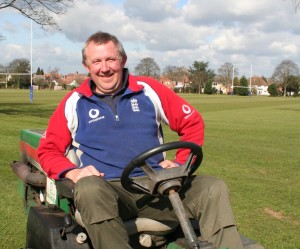 Geoff Calcott, one of the most respected people in local cricket, has died at the age of 57. Geoff was a very popular character who touched the lives of many.

His funeral, followed by a memorial service at the Holy Trinity Church in Stratford upon Avon was held on Friday 30th August. The memorial service, attended by over 300 people, was a fitting tribute to commemorate the life of a genuine and much respected member of the cricketing fraternity.

There were representations from many cricket clubs, including Warwickshire CCC. The local newspaper, the Stratford Herald, carried a fitting tribute that summed up Geoff's popularity and dedication as a father, sportsman and groundsman - "An irrepressible spirit and ever enthusiastic commitment to the game of cricket made Geoff friends and admirers right across the county of Warwickshire and beyond."

Ask any local cricketer or club member who has been involved in the game over the last 20 years and they will know Geoff very well. Indeed, many will have benefitted from his technical expertise and vast knowledge of the game.

Geoff, a King Edward VI Grammar School old boy, started his career with Lloyds Bank but soon realised, as a result of his love for sport, and in particular cricket, that he was destined for a life close to turf and wickets.

He was the sole groundsman at Stratford Sports Club from 1984 to 2007 where he maintained both cricket and grass hockey pitches and was required to produce pitches at premier league standard on a weekly basis. During this period, Geoff provided top quality pitches for Warwickshire county cricket club 2nd XI for one, three and four day matches on over 20 occasions, culminating in three first class matches involving Lancashire (shown live on Sky TV), Hampshire and Scotland together with two ECB women's internationals for England ladies against Australia and New Zealand. All matches were played on pitches prepared by Geoff.

From 2004 onwards, he was an ECB County pitch advisor for Warwickshire.

From 2008 to 2010, Geoff worked for Kenilworth Warden's Cricket Club, again producing ECB premier league standard facilities plus football pitches in the off season. For 13 years he also looked after 21 acres at King Edward VI Grammar school playing field and was featured in the Pitchcare magazine. 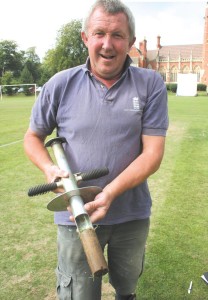 In addition, he was a sports turf contractor regularly maintaining 15 - 18 clubs, some of whom had been customers for 20 years.

Geoff was a keen all round sportsmen and was a playing member of Stratford Rugby Club, Stratford Athletics Club and Stratford Cricket Club.

When he gave up playing cricket due to ill health, it didn't prevent Geoff continuing his association with many clubs, not only in his professional capacity but acting as secretary, fixture secretary, umpire, chairman of the Cotswolds Hills league, County liaison officer and assisting with the reastablishment of Sunday cricket at Stratford. He was also instrumental in promoting junior cricket, in particular though his son Christopher, at North Cotswold young cricketers club and Leamington cricket club.

More recently, Geoff was a very welcome addition to Pitchcare's team of training instructors. His input and involvement in the development of the cricket maintenance courses over the last four years has been invaluable. His knowledge, enthusiasm and humour will be sadly missed.

Geoff met his wife Sioban at Stratford cricket club and she soon realised just how besotted Geoff was with the sport when he decided to complete a midnight run around a mountain in Wales one new years eve to raise funds for the club. Sioban told the Herald it was not unheard of for Geoff to run half a marathon in the morning and play cricket in the afternoon. The couple developed their own mantra, which they believed most accurately reflected Geoff's outlook on life as a whole. It reads simply 'Be positive and productive'.