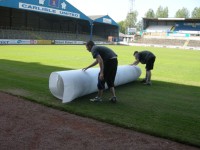 Whilst other clubs waited nervously to see just how their existing ground sheets would cope with severe frost in late January/early February, the directors and players at Carlisle Utd FC could prepare for their 4 games in 11 days safe in the knowledge that their Geofleece Pitch Protection system could cope with the adverse weather conditions that were forecast.

And, by playing regularly, it gave the players that all-important match sharpness to enable them to defeat the mighty Leeds Utd on February 9th to earn their place in a Wembley Cup Final!

The Geofleece Pitch Protection system, marketed by JMS Sport, is made here in the UK from recycled plastic. It has been the subject of an independent trial at Wolverhampton Wanderers FC where it was proven to be able to keep out frost to minus 8 degrees. 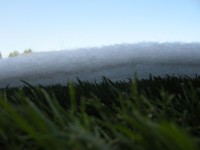 The special honeycomb of soft fibres locks out the frost, traps in the ground heat and allows air flow to ensure that revenue-generating fixtures are not postponed because of a heavy frost.

Having to postpone a scheduled weekend fixture results in a serious loss of revenue. The FA Cup match at St Mary's between Southampton and Portsmouth was scheduled for terrestrial TV with a mid-day kick-off. The fee from TV alone was £247,000! With a postponement and a rescheduling for a week day they were unlikely to get that TV fee and the same attendance figures and other revenue streams would also have been severely diminished. 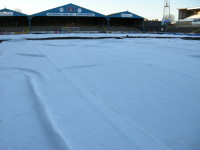 Carlisle Utd FC Director, John Nixon, said: "The loss of a game, particularly a Saturday fixture, means a considerable loss of revenue, even at League 1 level. We estimate it to be around £30,000. We also have to then cope with the resulting fixture backlog issues it gives us later in the season. Cash flow streams are vitally important at all levels of football as wages and expenses need to be found regardless of income issues .

The investment we have made at Carlisle United FC in the "Geofleece" system will be recouped within this season and Geofleece will be available for use for many seasons to come, protecting games and regular cash flow".