by External source
in Industry News
on 23 Apr 2015 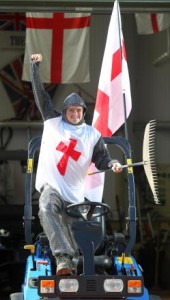 It is not every day that a national icon gets to grips with a mower.

But residents in West End can spot 'St George' doing just that over the next few days as a local council worker does his bit to raise national pride for the saint's big day.

Aptly named George Hallett has been spending the last few days mowing park land in the guise of St George, wearing a costume of full knight's 'armour' and helmet and carrying an English flag on the back of his ride-on mower.

The 20-year-old groundsman, who works for West End Parish Council, has been doing his early morning mowing of Hatch Grange in West End in his quirky outfit, and will continue to do so up to and including St George's Day.

The groundsman team at the parish council got talking about St George's Day and came up with the idea of wearing the costume to raise awareness.

Being his namesake, it was decided that George would be best to don the outfit.

It comes as the Daily Echo backs Southampton Itchen MP John Denham's call for the cross of St George to be displayed from every flagpole on St George's Day.

Anyone without a flagpole is being urged to display flags from windows, balconies and any other vantage points.

"I think everyone should be proud of their country," said George, of Allen Road, Hedge End.

"We should celebrate it a bit more than we do at the moment."

Though he is yet to encounter any public comment due to the early time of day, he said that his parents on seeing his outfit "just kind of laughed".

Although George said that the outfit did not make his job any more difficult, the former Wildern School pupil said he felt hotter than when wearing his normal uniform.

The legend goes that St George fought and slayed a dragon to rescue a princess.