0 Get into the Grove 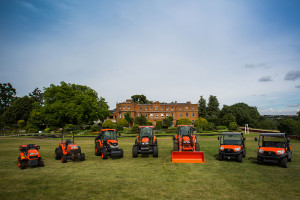 Few golf courses can claim to have hosted two of the world's most powerful men. But The Grove did just that when Barack Obama joined the then Prime Minister David Cameron on course during the President's visit to the UK in April 2016.

The two men enjoyed 18-holes of golf, accompanied by what was naturally a considerable entourage for the pair, who put politics aside to enjoy the surroundings at what is rightfully regarded as one of the UK's most prestigious courses.

Despite being only a young course, The Grove has carved out a niche in the market as a test for professional and amateur golfers alike; a challenge that is the hallmark of its designer, Kyle Phillips, who is perhaps best known for his work at Kingsbarns Golf Links in Scotland.

Constructed in 2001, the inception and construction of The Grove's picturesque 18-hole course was from the outset overseen by Course Manager Phill Chiverton, who this year celebrates his fifteenth year at the helm, having joined the club as Golf Course Manager to project manage the construction.

The club's reputation as a leading UK venue was solidified in 2006 with its hosting of the WGC-American Express Championship, which Tiger Woods won, and further stamped its authority when it hosted the British Masters, supported by Sky Sports, this October.

With such a high-profile roster of regular guests, both on and off the course, the task of ongoing maintenance is no mean feat, yet it's one that Phill is well-equipped to lead, having previously spent a decade at The Buckinghamshire and, before that, two years at Wentworth Golf Club. 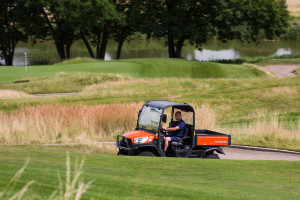 Thirty-two years in the trade has given Phill the requisite grounding needed to tackle what is now a wide remit that, in addition to golf course maintenance, also includes maintenance of a football pitch, bowls green, croquet lawn and a picturesque walled garden; a task which is supported by a team of 14 full time staff.

"The Grove is a fantastic place to work, and the mix of duties makes it both enjoyable and challenging. In support of our 14 permanent staff are five seasonal staff and we had around 40 volunteers for the recent British Masters," explains Phill.

"The greenkeeping staff are just one part of our wider team, which also includes a service and maintenance division, headed up by our Head Mechanic, Neil Corley. Neil and the rest of the team take an active role in the decision making, and that includes the purchase of a wide range of kit and machinery needed to maintain our span of facilities," he adds.

Building upon established relationships is at the heart of Phill's operation and success, and where equipment purchase is concerned, this has resulted in partnerships with brands and local dealer networks that have lasted decades. One of these long-standing partnerships is with Kubota, a company that Phil has been associated with for over 25 years, having used its range of compact and mid-range tractors, utility vehicles and mini-excavators throughout his career.

Most recently, the club welcomed the arrival of three new machines, an L5740, an M9960 and an RTV-X900 - adding to an existing fleet of Kubotas that includes three RTV-X900s, an M8540, two compact STV40s and a U Series mini-excavator. Local dealer, George Browns, with whom Phill has enjoyed a two-decade-long relationship, has supplied all of this. 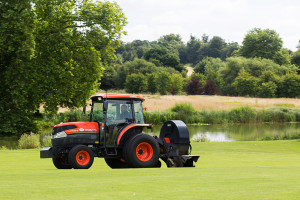 "I've always bought Kubota tractors. They're extremely reliable, well built, simple to use and have excellent residual value," explains Phill. "The nature of our mixed workload, which includes a lot of pallet work, top dressing, hollow coring, composting and grab work, means we need kit that is powerful but compact. Our front loader sees a lot of action, so we need tractors that have a good lift capacity but are also workhorses. I've always found that Kubota gives us that match."

Prior to trialling the latest models, which the club has now purchased, Phill and the team tested other rival manufacturers, but was adamant that his loyalties lay with Kubota.

"It's good practice to go to market and test other options before making the final decision, but we found that on a number of factors Kubota won outright. The input from our head mechanic is key to these decisions, as ease of maintenance and reliability must be factored in. We've always found Kubota's range to be easy to manage and, importantly, they rarely breakdown."

Phill's commitment to building on existing partnerships is evident not only via his relationships with Kubota and George Browns, but also the relationships he, and the club, has with the likes of Toro and Club Car.

"We've used both brands for as long as I've been here and we have no inclination to switch. My belief is this: if it isn't broke, don't fix it. We enjoy excellent levels of service with all our dealer partners, and notably with George Browns. I've dealt with Peter Hopkinson for over two decades, so he knows what I want and always delivers for us." 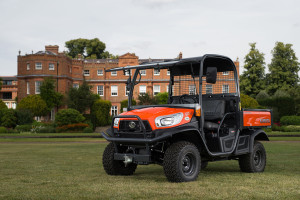 Away from the golf, Phill's skill set has widened since his joining The Grove, with the demands now to maintain its football pitch, bowls green and croquet green. Whilst not used all-year-round, the club's football pitch has in the past played host to the England squad and, more recently, clubs from the NFL, which have used The Grove as a base when in the UK for fixtures at Wembley Stadium.

As a result of the increased demands, the pitch has undergone a recent investment, upgrading from a natural construction to an Eclipse Sports Turf pitch - a stabilised system that combines natural and synthetic elements. The requirement to maintain the surface has, in Phill's own admission, led him to bolster his knowledge.

"The industry has changed drastically in my time, from a scientific perspective and with regard to the sophistication of modern turf machinery. I've been a greenkeeper my whole working life, but preparing turf for football is a very different challenge with regard to the conditions needed for optimum play, to mowing and maintenance practices. These wider requirements on us have led to the whole team improving its skills set.

"We strive for the highest possible standards, which includes our commitment to invest in continued staff development and training through to using the best turf machinery on the market. We feel we have the right balance, supported by our dealer partners who understand our needs."

For more information on Kubota and its extensive range of solutions for the groundcare sectors, or to find your local dealer, visit www.kubota.co.uk or call 01844 268000.