0 Getting personal with Adam Matthews 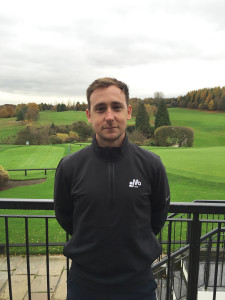 Adam Matthews - nothing changes under the duvet ... apparently!

Who are you? Adam Matthews, Course Manager at Moor Allerton Golf Club.

Family status? Engaged to Ella Steel and have a beautiful daughter Evie-Rose who was three in December.

Who's your hero and why? My brother Scott; he's served out in Afghanistan with the RAF. I think anyone who has the courage to do what those guys do, especially out there, is amazing.

What would you change about yourself? Height and bank balance!

What's been the highlights of your career so far? Producing an award winning Test match cricket pitch and, of course, being given the opportunity as course manager at Moor Allerton Golf Club.

Which three people, living or dead, would you invite to a dinner party? George Best, Pablo Escobar, Dan Bilzerian ... I don't think that needs too much explaining really!

If you could be anyone for a day, who would it be and why? My treasurer - for obvious reasons!

Do you have any bad habits? Forgetful, and an inability to hang washing out.

... or any good ones? Spending money on the Mrs! Or should that be above?

Do you go to bed worrying about the next day's workload? Never. Thinking about it, yes, but not worrying. You can't change anything from under your duvet, so it's a waste of time worrying.

What are you reading at the moment? 'Sins of my Father' by Sebastian Marroquin (born Juan Pablo Escobar).

What are your pet peeves? People who don't listen to instructions or don't do what they've said they will!

If you could go anywhere right now, where would it be? On a private island; sun, beach, no kids or phones!

What's the best part of your job? Passing on good feedback and compliments to the lads.

… and the worst? Waiting for decisions and responses.

Do you have a lifetime ambition? To be comfortable enough to do anything without worrying about money.

Favourite record, and why? Danny Daze - Your Everything. Good memories of the days when hangovers didn't matter.

Who would you choose to spend a romantic evening with? Obviously it'd be the Mrs but, if she was busy, I'd be quite happy to give Michelle Keegan a call.

If you won the lottery, what is the first thing you would do? Euro Millions - buy Massimo Cellino out of Leeds United and sell 49% back to the fans! Lotto - take the family and the lads to Vegas.

What's the best advice you have ever been given? If you don't ask, you don't get.

What's your favourite smell? A French bakery first thing in the morning.

What do you do in your spare time? Big sportsman, play a lot of football and golf and spend time with the family.

What's the daftest work related question you have ever been asked? Morning of a county championship match in April, the coach comes out, bends down and puts his hands on the pitch and looks to us; "It's cold isn't it; how come it's so cold?" My boss at the time replied brilliantly; "you'd be effing cold if you'd been left out all night!".

What three words would you use to describe yourself? Fair, organised and impatient.

What talent would you like to have? I'd love to play the electric guitar fluently.

What law/legislation would you like to see introduced? All lieu time must be classed as paid overtime! That Leeds United buy out might be on the cards then!