0 Getting Personal with Chris Drury 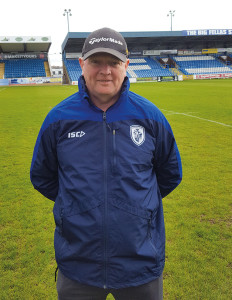 Chris Drury - if you fail to indicate, make sure you have chocolate at the ready!

Who are you? Chris Drury, the Head Groundsman at Featherstone Rovers Rugby League Club.

Who's your hero and why? John Holmes - ex-rugby league player. I thought he was one of the greats.

What would you change about yourself? Learn to count to 10, and to get rid of my temper - I've not got red hair for no reason.

What's your guilty pleasure? Chocolate - any of it. An open tin of Celebrations is not safe.

What's been the highlight of your career so far? When Leeds United played Valencia in the Champions League semi-final was really special.

What are your pet peeves? People taking shortcuts across pitches.

Who does that? Everybody!

If you could go anywhere right now, where would it be? Melbourne for a Boxing Day Ashes Test.

… and the worst? Weather.

Do you have a lifetime ambition? Not anymore [he laughs]. But really - I think: just to enjoy life.

Favourite record, and why? I'm a big Beautiful South fan. They were the ones I did enjoy. They had 'Song For Whoever', that was their biggest.

Who would you choose to spend a romantic evening with? It's got to be the wife … but if Jennifer Aniston was free, that might change.

If you won the lottery, what is the first thing you would do? I never really want for things like that. I don't want things that you've got to spend all that money on. Probably buy some new machinery for Fev.

Which three people, living or dead, would you invite to a dinner party? Jennifer Aniston's one, for reasons we've already mentioned. Peter Kay, to keep us all entertained. And my Dad, who's no longer with us. I'd bring him so I could see him again.

If you could be anyone for a day, who would it be and why? A professional golfer maybe … I love it, but I've never been able to play it that well. Maybe Tiger.

Do you have any bad habits? Chocolate again. But, to be fair, I'm 5-years retired from smoking, so not that many any more.

Do you go to bed worrying about the next day's workload? Occasionally. When the weather's bad. It used to be every night in the football environment, but this is different. There's a certain constant pressure to the football world. And, as we keep saying, it's just a nice mood here and everyone's always just doing their best.

What are you reading at the moment? Autobiographies. The autobiographies of anybody and everybody in sport. Sam Allardyce's was the last one I really read a bit after Christmas - that one was a present - but I've scanned some others since too.

What's the best advice you have ever been given? Bull**** baffles brains. That was my mentor, Keith Boyce, Head Groundsman at Yorkshire Cricket Club.

What's your favourite smell? Bacon frying. I should put grass being cut with my job really but, yep, if I'm being honest, it's bacon.

What do you do in your spare time? Watch sport. Leeds United. Yorkshire and England cricket. England rugby union. Leeds Rhinos. And now Featherstone - or at least that's what they'd want me to say, anyway.

What's the daftest work related question you have ever been asked? How do you get different shades of grass? Do you use different grass seed? Some people test your belief in whether they're being serious.

What's your favourite piece of kit? Dennis G860 mower. It's that one over there [pointing].

What three words would you use to describe yourself? Moody, but cares.

What talent would you like to have? Playing an instrument. Probably the guitar in particular.

In a band? In a band would be nice; yes.

What law/legislation would you like to see introduced? People should have to use indicators. They should be banned from driving if they don't.