0 Getting Personal with Dan Barnes

Dan Barnes - enjoy your meal quietly, unless you are with Boris, Elon and Borat! 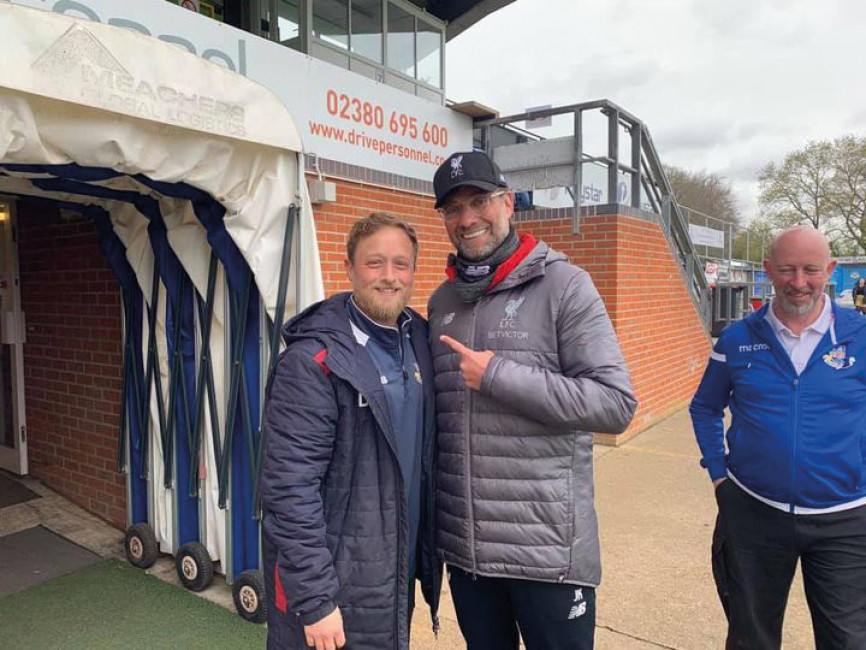 Who are you? Dan Barnes, Head Groundsman at Eastleigh Football Club of the Vanarama National League.

Who's your hero and why? My grandad. He first introduced me to home grown vegetables, how butterflies love cabbage, but don't love a rolled-up baton of newspaper and what it took to maintain and upkeep his proud patch in his back garden. His passion and kind nature will never be matched. He also allowed me my first experience using his Allett Cylinder mower in his garden. I swear he knew deep down how often I would get frustrated at a young age that I could not keep a straight cut line when looking after his lawns, but it set my on the right course.

What's been the highlight of your grounds career so far? Probably having Liverpool train and use the facilities at the Silverlake Stadium ahead of one of their fixtures at Southampton. Meeting Jurgen Klopp, the players and just the surreal moment watching them train on something you produce and hearing such positive feedback from people of that status within the industry was an extremely proud moment. Along with that, I would say the realisation of what a tight knit and supportive industry this is and how lucky I have been to build working relationships and friends along the way.

If your younger self saw you now, what would they think? You'd look better cutting the grass if you lost weight!

Which famous people wind you up? A Gok Wan/Keir Starmer love child would just be intolerable.

What job would you love, other than your own? Crime Scene Investigator. Failing that, some sort of chocolate connoisseur.

What was the most embarrassing moment in your life? There's potentially far too many to recall!

What is your favourite film? I'm not particularly a film lover, but I have always enjoyed Saving Private Ryan, and Avatar when it first came out was pretty amazing.

What scares you? Pigeons and Worms.

What would your autobiography be called… and who would play you in the film? It's/He's Just A Weed - (After previously being told grass growing cannot be that hard as it 'grows on motorway verges') - got to be Tom Hanks.

What would you cast into Room 101? People eating unnecessarily loudly.

Which historical time and place would you most like to visit? Baikonur Cosmodrome on April 12, 1961.

Do you have a lifetime ambition? To be content with what I have achieved and for my daughter to be proud of me.

Which three people, living or dead, would you invite to a dinner party? Boris Johnson, Elon Musk, Borat.

What's the best advice you have ever been given? The only thing you can control in a situation is your reaction.

What's your favourite piece of trivia? I googled 'What does trivia mean'? The first answer was - "Insignificant or inessential matters; trifles" - therefore Trifles.

What three words would you use to describe yourself? Conscientious, ridiculous, weird.

Which three albums would you take to a desert island? Three Times Over (Self-titled EP). Englebert Humperdink - Spanish Eyes. We are the Ocean - Go Now and Live.

What's the daftest work-related question you have ever been asked? How's the pitch? After the wettest winter on record.

What's your favourite piece of kit? Probably my drums, but I can't continue to live in the past struggling to accept I could be considered a failed rockstar, so it will have to be the Honda for post-match clean ups.

What is the single most useful thing you could tell a 16-year-old groundsperson? Don't be afraid to ask questions… and just when you feel you're running the risk of becoming a pest - ask ten more!

What talent would you like to have? To be able to write in something other than capitals. I do it constantly and for no apparent reason.

What law/legislation would you like to see introduced? Something which stops keepers kicking the hell out of posts. Maybe a law which states if they do feel the need to aggressively attack the posts unnecessarily then they will be obliged to repair it immediately after with a supplied pot of touch up paint.