0 Getting Personal with David Massam 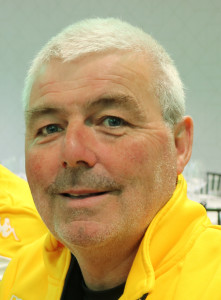 David Massam - he looks a lot like George Clooney!

Who are you? I'm David Massam.

Family status? Married, with two children. A daughter and son.

Who's your hero and why? Eric Cantona. (Until that kick) he set a good example for how to behave on and off the pitch. He changed Manchester United.

What's been the highlight of your grounds career so far? Producing pitches for top-flight clubs' matches - they made positive comments too. Duncan Ferguson was complimentary. He knows what a decent pitch is.

If your younger self saw you now, what would they think? 'How did you end up preparing football pitches?' When you play, you don't think about the pitch much.

Which famous people wind you up? Politicians. Not of any particular party. People who don't say realistic things.

What job would you love, other than your own? To have been a footballer..

A wasp lands on your arm - what do you do? Nothing. It wouldn't bother me.

What is your favourite film? Caddyshack - I like my golf.

What scares you? Getting old.

What would your autobiography be called… and who would play you in the film? Legend. George Clooney. People say I look like he did twenty years ago, because we both have grey hair.

What would you cast into Room 101? Work.

Which historical time and place would you most like to visit? We visited the National Arboretum last year, my father-in-law was a serving Merseyside police dog handler and has a plaque there. He died as a result of injuries sustained in the 1981 riots in Liverpool. The day we visited the arboretum it was Remembrance Sunday. It made me so proud. It has to be the most uplifting place I've ever been to.

Do you have a lifetime ambition? For everybody in the family to stay healthy.

Which three people, living or dead, would you invite to a dinner party? Alex Ferguson. Freddie Mercury. My Dad.

What's the best advice you have ever been given? My Dad always said to me as a kid, 'don't have regrets; don't ever say 'if''.

What's your favourite piece of trivia? There's no information. But, I'm always getting sighed at for looking at horses and asking, 'why the long face?'

Which three songs would you take to a desert island? Bohemian Rhapsody. We Are the Champions. Don't Stop Me Now. All by Queen.

What's the daftest work-related question you have ever been asked? An ex-Premier League footballer once said to me, 'I'm about to ask you a stupid question. Just answer it. With the present state of our pitch, with no irrigation, can you please put some water onto the pitch before the game.' I told him, 'only if we delay kick-off.'

What's your favourite piece of kit? I do like the old Wiedenmann Terra Spike.

What three words would you use to describe yourself? Honest. Reliable. Loyal.

Finally, what is the single most useful thing you could tell a 16-year-old groundsperson? 'Realise that this job is a long one. You have to be prepared to persevere to reap any benefits. It never happens overnight.'