0 Getting Personal with David Mitchell

David Mitchell - he loves the smell of shoe polish and gets the job done! 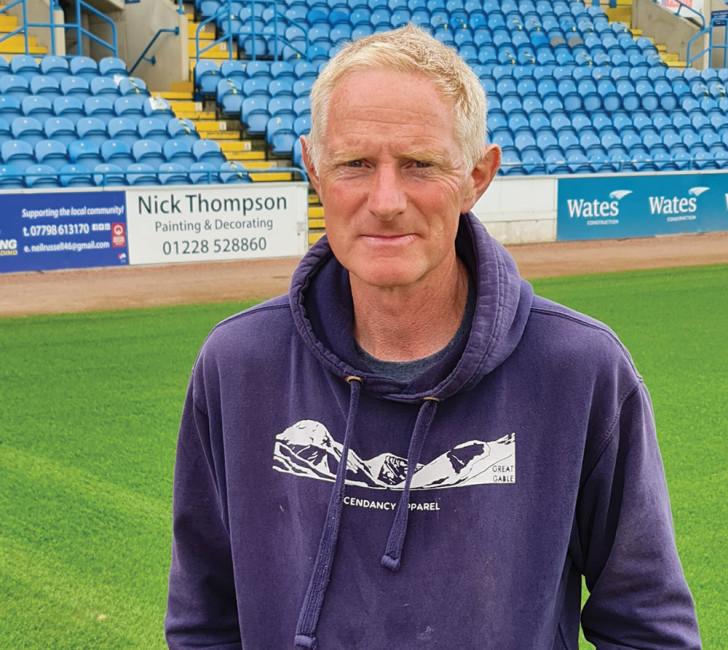 Who are you? David Mitchell, Head Groundsman at Carlisle United FC.

What's been the highlight of your grounds career so far? Getting the pitch back to a playable condition in January 2016, after floods in the city left the ground under 8ft of water.

If your younger self saw you now, what would he think? You've achieved a lot in your career.

Which famous people wind you up? Claudia Winkleman and Alan Shearer.

What job would you love, other than your own? Looking after war graves.

What was the most embarrassing moment in your life? Smashing my head off the side of a swimming pool, whilst wearing flippers on a lesson … at the age of 36!!

What is your favourite film? Home Alone 1 (keep the change ya filthy animal).

What scares you? Snakes!

What would your autobiography be called… and who would play you in the film? Get Off The Pitch with Clint Eastwood.

What would you cast into Room 101? Dog owners that don't pick up and drivers that brake when the lights are on green.

Which three people, living or dead, would you invite to a dinner party? Richie Benaud, Bob Mortimer and Jeff Lynn.

What's the best advice you have ever been given? Just do your job!

What's your favourite piece of trivia? It's an eight mile walk to cut the Brunton Park pitch.

Which three albums would you take to a desert island? Out of the Blue (ELO), The Big Wheel (Runrig) and What You See Is What You Get (Luke Combs).

What's the daftest work-related question you have ever been asked? Is that grass artificial?

What three words would you use to describe yourself? Hard-working, loyal and impatient.

What is the single most useful thing you could tell a 16-year-old groundsperson? Watch, look, listen and learn.

What law/legislation would you like to see introduced? Make professional football a "ball in play" 60 minute game.