0 Getting Personal with Frank Kempster 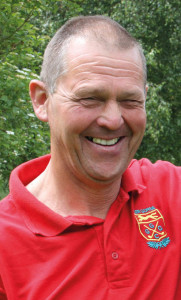 Frank Kempster - bit of a liaison man - in more ways than one!

Who's your hero and why? John Wayne, because he was an all-round super hero.

What would you change about yourself? The worry lines the job has given me, as I'm only 16 really.

What's your guilty pleasure? The odd glass of red wine or two.

What do you drop everything for? Any time my lads have a problem, I try to help them out.

What's been the highlight of your career so far? Been quite a few really, but I think being clubhouse leader at Dundonald Links in the BIGGA Championship 1st round with a net 68 a few years ago.

Glass half full or half empty? Half full - you have to try and look on the positive always - things have a reason for happening.

Climate change - fact or fiction? Fact - there is something wrong somewhere. It's totally different from when I started in the profession in the early 60s.

What's your favourite season? It used to be spring, but now all seasons tend to blend into one another.

What are your pet peeves? Golfers who never play other courses, but continually complain about yours without seeing other clubs' problems.

If you could go anywhere right now, where would it be? Cruising on the Norfolk Broads.

What's the best part of your job? Knowing on a Friday night you have done everything for the weekend; rarely does this happen though!

… and the worst? A.O.B. at Course Committee meetings.

Do you have a lifetime ambition? To see Leicester City win more silverware than Forest (sorry Whitey).

Who wouldn't you like to be? Any of our armed forces in the front line.

Favourite record, and why? Bohemian Rhapsody, because Freddy Mercury was an absolute star.

Who would you choose to spend a romantic evening with? Can't say, just in case her husband reads this!

If you won the lottery, what is the first thing you would do? Give the golf club a few quid then treat Nigel to a season ticket at the King Power Stadium.

If you were to describe yourself as a musical instrument, what would you be and why? Kettle drum, as I like to make a lot of noise at football matches.

What's the best advice you have ever been given? Don't eat the yellow snow in the winter.

What's your favourite smell? First cut of the year - it's wonderful.

What do you do in your spare time? Corporate Liaison person at the King Power Stadium, L.C.F.C.

What's the daftest work related question you have ever been asked? Why can't Glen Gorse be like Augusta?

What's your favourite piece of kit? Verti-Drainer - best thing ever

What three words would you use to describe yourself? Perfectionist, dedicated and committed to Glen Gorse.

What talent would you like to have? A better golfer

What law/legislation would you like to see introduced? All moaning golfers asked to leave the club; you do your best, but sometimes it's still not enough.