0 Getting Personal with Gareth Shaw 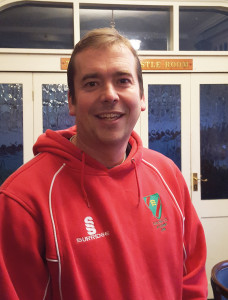 Who are you? Gareth Shaw, Head Groundsman at Ealing Cricket Club.

Family status? I'm married, with a daughter who is just about to turn three.

Who's your hero and why? Viv Richards, because of that arrogant swagger when he walked to the crease.

What would you change about yourself? I need to lose some weight.

What's your guilty pleasure? I drink a bit too much.

What's been the highlight of your grounds career so far? When Ealing CC won the Evening Standard Cup, which garnered a £10,000 prize.

What's been the highlight of your political career so far? Just recently, Ealing Council are taking on a stance against people protesting outside abortion clinics. It causes great distress and trouble to the patients. These are people just trying to access healthcare to which they are entitled.

What are your pet peeves? Rain on Fridays and Saturdays.

If you could go anywhere right now, where would it be? I'd go to Australia to watch The Ashes.

What's the best part of your job? It's the range of people that we meet. There's such a broad spectrum represented on matchdays here.

… and the worst? Pre-season rolling at the end of February.

Do you have a lifetime ambition? To make sure my daughter is a happy, successful adult.

Favourite record, and why? Hotel California by The Eagles.

Who would you choose to spend a romantic evening with? My wife, although she doubts I'm capable of romance.

If you won the lottery, what is the first thing you would do? I would buy my own house in London.

What's the best advice you have ever been given? Get a good night's sleep.

If you could be anyone for a day, who would it be and why? The Chinese leader, because it would be such a different state of politics and leadership. And they are the emerging force in the world. It's being done in a completely different fashion.

Do you have any bad habits? I bite my nails.

Do you go to bed worrying about the next day's workload? At times - when the cover and sheets are on, and rain's forecast.

What are you reading? 'Who Goes Home?' by Roy Hattersley.

What do you do in your spare time? The politics stuff is my spare time really.

What's the daftest work-related question you have ever been asked? A guy was watching me set the stump holes in the pitch. He kicked his shoes and socks off and asked, "Do you mind if I drag my feet along the pitch to get the feel of it?". He did it.

What three words would you use to describe yourself? Honest, empathic, generous.

What talent would you like to have? I'd love to be decent at cricket. In my fantasy, I'm batting my way to a hundred.

What law/legislation would you like to see introduced? Limiting batsmen and wicketkeeper's markings. They're bored, but some of the damage is irreparable.