0 Getting Personal with Graeme Glen 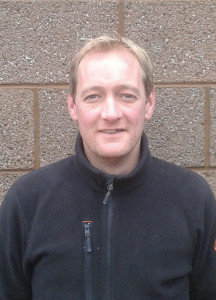 Graeme Glen - a late night with a verti-drain or Rachel Stevens - decisions, decisions!

Who are you? Graeme Glen, Head Groundsman for Stirling Albion FC/Stirling University FC.

Who's your hero and why? Eoin Jess. A boyhood hero of mine watching from the terraces. The most under appreciated player in Scottish football.

What would you change about yourself? My stinking feet.

What's been the highlight of your career so far? Enjoying greenkeepers' camaraderie when preparing for tournaments.

Which three people, living or dead, would you invite to a dinner party? Nigella Lawson, Kevin Bridges and Miguel Jiminez. Guests who are alive would be more fun.

If you could be anyone for a day, who would it be and why? Tim Peake - to look down on Earth from the Moon

Do you have any bad habits? Being unable to say no.

Do you go to bed worrying about the next day's workload? No. I'd plan, but never worry.

What are you reading at the moment? A Man Called Ove by Fredrik Backman

What are your pet peeves? People who go to live events and spend the whole time watching it through their phone.

If you could go anywhere right now, where would it be? I'd go to 11th May 1983, Ullevi Stadium in Gothenburg and watch Aberdeen's finest moment beating Real Madrid.

What's the best part of your job? Late night verti-draining. Earphones in and floodlights on with the place to myself.

Do you have a lifetime ambition? For my daughters to one day tell me I've been a good father.

Favourite record, and why? Too many. Proclaimers - Life With You (first dance with Jenni). Mark Knopfler - Going Home (late father's song). Kenny Rogers - The Gambler (few pints, get it on the juke box!). Human League - Don't You Want me Baby (League Cup Final 2014). There's many more… it's important to have a soundtrack to life.

Who would you choose to spend a romantic evening with? If the wife wasn't available, Rachel Stevens.

If you won the lottery, what is the first thing you would do? Pay off all my family's mortgages.

If you were to describe yourself as a musical instrument, what would you be and why? Triangle - discrete, but effective.

What's the best advice you have ever been given? Never judge someone on first impressions.

What's your favourite smell? Frying bacon in the morning.

What do you do in your spare time? If time allows, golf or sail, but mainly spend time with the kids and walking Boomer.

What's the daftest work related question you have ever been asked? Regularly after spraying - "Why have you painted the pitch blue?" - having used indicator dye.

What's your favourite piece of kit? Charterhouse 7212 Verti-Drain. It belongs to the cricket club, but it's bailed me out a few times this winter.

What three words would you use to describe yourself? Trustworthy, motivated, compassionate

What talent would you like to have? To be multilingual, particularly Italian.

What law/legislation would you like to see introduced? To limit the amount of new laws introduced. There seems to be a new one every other day!