0 Getting Personal with Kristinn V. Johannsson 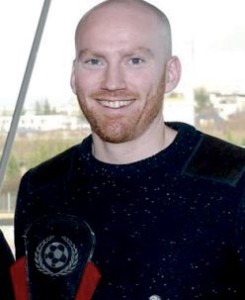 Kristinn V. Jóhannsson - check out Sigur Rós on YouTube - he may be right!

Who are you? Father, boyfriend, brother, friend, son, and a groundsman.

Who's your hero and why? Michael Jordan - simply the best. My parents too.

What is your dream holiday? New York and Tenerife and, some day, I would like to go to Egypt and Venice.

What annoys you the most? Rude and dishonest people, bad drivers and being late.

Who wouldn't you like to be? Jack Bauer's enemy!

Favourite record, and why? Ágætis byrjun, Takk and Með Suð í Eyrum við Spilum endalaust by Sigur Rós. The best band in the world. [We'll have to take his word for that. Ed.]

Who would you choose to spend a romantic evening with? Besides Una, I would say Anna Scott in Notting Hill.

If you won the lottery, what is the first thing you would do? Take Una to this little restaurant in Tenerife.

If you were to describe yourself as a musical instrument, what would you be and why? A piano, but I don't know why.

What's the best advice you have ever been given? My parents taught me so much, so I can't pick one specific thing.

What do you do in your spare time? Spend time with the family and friends, try to play golf and camping.

What's the daftest work related question you have ever been asked? This one, I think!

What's your favourite piece of kit? At the moment my iPad and my new retro phonograph.

What three words would you use to describe yourself? Honest, organised and happy.

What talent would you like to have? To be able to fly.