0 Getting Personal with Paul Newcombe

Paul Newcombe - I hope he doesn't show his wife this! 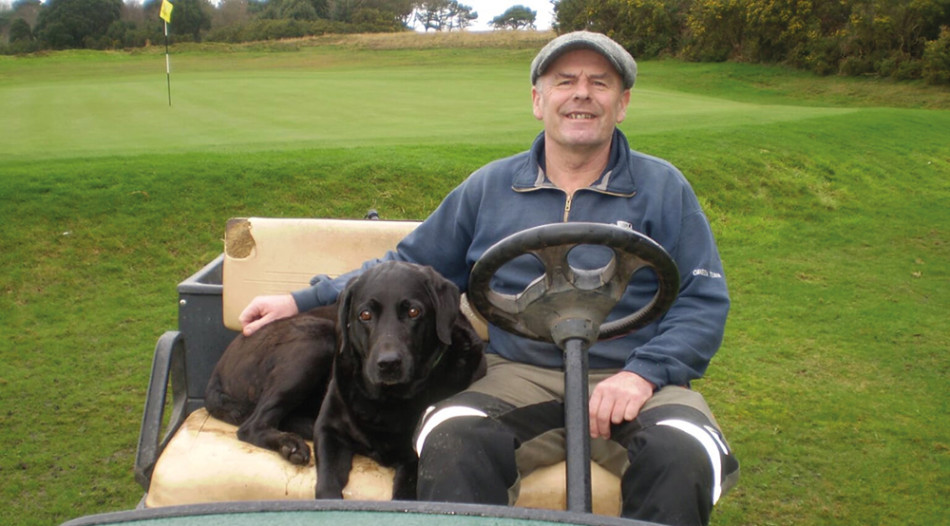 Who are you? Paul Newcombe, Head Greenkeeper at East Devon Golf Club.

Family status. Married (for too long) with a son Luke, who also works at the club.

Who's your hero and why? Away from family, Jim Arthur. Agronomy legend and personal friend. We shared a coffee most Fridays before his passing, as he lived 300 yards from our 18th green.

What has been the highlight of your grounds career so far? Being lucky enough to get my dream job at East Devon, some thirty years ago.

If your younger self saw you now, what would he think? You've done ok! Your putting could be sharper though.

What famous people wind you up? Politicians.

What job would you love, other than your own? Tournament Professional Golfer.

What was the most embarrassing moment in your life? Taking an unwanted George Foreman grill back to Comet saying it was unused. Standing at costumer service, as the packaging was removed, a sliver of fat slid out of the side in front of a sizeable queue!

What is your favourite film? Not a huge film watcher, but I loved Con Air.

What scares you? Not a great deal.

What would your autobiography be called and who would play you in the film? The Golfing Greenkeeper, played by James Dimond.

What is your favourite sport? Cricket - it's the finest sport in the world!!

What would you cast into Room 101? Never heard of it. It can't be on the sports channels.

Which historical time and place would you most like to visit? I don't like to look back.

Do you have a lifetime ambition? To attend The Isle of Man TT races.

Which three people, living or dead, would you invite to a dinner party? My sporting heroes; Tom Watson, Tiger Woods and Valentino Rossi.

What's the best advice you were ever given? If in doubt, don't. Jim Arthur.

What's your favourite smell? Cyren. Not the most pleasant smell, but you always knew it did the business. Sadly missed.

Which three albums would you take to a desert island? Really tricky one that. I love anything from Muse to Sinatra. Hard to pick just three though! ... Bjork would surely be there.

What's the daftest work-related question you have ever been asked? Why is the course closed? Stood next to a fully submerged 18th green.

What's your favourite piece of kit? I love the Baroness LM greens machine for the perfect finish, plus the Wiedenmann Terra Spike XF for keeping grass there.

What is the single most useful thing you could tell a 16-year-old groundsperson/greenkeeper? Ask questions on why you do everything.

What talent would you like to have? Play any instrument to a high standard.

What law/legislation would you like to see introduced? I'll leave that to the experts. Most golf clubs have them in abundance!