0 Getting Personal with Phil Kime 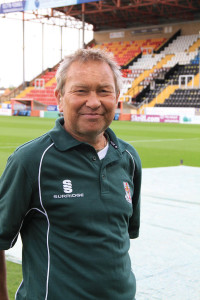 Phil Kime - sometimes out of tune, which is probably why he is an admirer of John Lydon!

Who are you? Phil Kime, Head Groundsman at Lincoln City FC.

Family status? In a relationship with a long suffering girlfriend.

Who's your hero and why? I haven't really got one as such. I admire people like John Lydon. Keith Alexander was a legend.

What would you change about yourself? My looks!

What's your guilty pleasure? Days off!

What do you drop everything for? Work.

What's been the highlight of your career so far? Getting this position.

Glass half full or half empty? I'm half and half on this question.

What are your pet peeves? Pigeons and linesmen.

If you could go anywhere right now, where would it be? On holiday with my girlfriend.

What's the best part of your job? People talking highly of our pitch.

… and the worst? Pitch covers!

Do you have a lifetime ambition? It is always nice to receive a bit of recognition for the work we do.

Who wouldn't you like to be? A groundsman with few machines and no budget.

Favourite record, and why? Got a few. Probably the Love album by The Cult gets played more than most.

Who would you choose to spend a romantic evening with? My girlfriend.

If you won the lottery, what is the first thing you would do? Buy loads a fantastic machines!

If you were to describe yourself as a musical instrument, what would you be and why? An electric guitar. Often loud and sometimes out of tune.

What's the best advice you have ever been given? It is what it is.

What do you do in your spare time? What's that then?

What's the daftest work related question you have ever been asked? Either the question above or - do we use a different seed for the different patterns?

What's your favourite piece of kit? They all play a part. The Charterhouse Verti-drain has made a big difference though.

What three words would you use to describe yourself? Thorough, busy, studious.

What talent would you like to have? Just to keep learning at what I do.

What law/legislation would you like to see introduced? Linesmen alternating their runs again.