0 Getting to the ‘Grass Roots’ of the problem

Over the past decade, the effects of plant parasitic nematodes on turfgrass have become increasingly clear. Weak rooting, chlorotic surfaces and turfgrass that responds poorly to nutrient application have become an increasingly common problem on pitches ranging from the local club or council field to the elite sports stadium.

A common factor shared by many sportsfields experiencing nematode damage is their sand based construction. Typically, in the UK and Ireland, new sand based pitches show little evidence of plant parasitic nematode damage in their first years of growth. However, with time, the initially low levels of nematodes start to form localised "hotspots", where significant root damage and visual turf symptoms can be seen. The high level of sand used in these sportsfields provides perfect conditions for some of the most damaging turfgrass nematode species affecting pitches, including root knot nematodes (Meloidogyne), sheath nematodes (Hemicycliophora) and stubby root nematodes (Trichodorus and Paratrichodorus).

After a few years, nematode populations can build up to levels where damage is sufficient to cause actual turf thinning and performance issues during play. Problems can be accentuated in situations where undersoil heating is used, the higher soil temperatures encouraging the development of higher nematode levels. 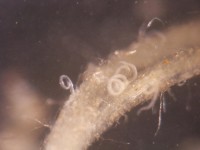 Work carried out at AFBI and the Queens University of Belfast on soil samples from golf courses and sports pitches has revealed significant differences in the nematode populations affecting a range of turfgrass species and rootzone construction types, with over seventeen different types of nematode found regularly in UK sportsturf.

Nematode diversity (the range of types present) also tends to increase with the age of the pitches, and new sports pitches can, surprisingly quickly, suffer from the effects of a diverse population of plant parasites, each affecting turf growth in different ways.

One of the current dilemmas facing a groundsman with nematode problems is determining whether or not treatment is necessary and, if so, when to apply a suitable product. Damage threshold population levels (often used as a trigger point for applying a nematicide) vary depending on the nematode species present. For example, the usual damage threshold for stunt nematodes (Tylencorhynchus) is 300 worms per 100ml soil, while 20 needle nematodes (Longidorus) in the same volume of soil can cause serious root damage. 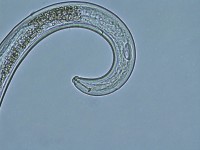 Other environmental stresses can modify these population thresholds, with factors such as low light levels, water stress or disease reducing the size of the nematode population required to cause serious turf damage. It is now clear that reducing turf stress (e.g. by applying suitable biostimulants) can be as important as reducing nematode levels when managing plant parasitic nematode infestations.

The wide range of nematode types found in turfgrass means that delivering effective control of plant parasitic nematodes can be a demanding task for the groundsman.

However, a better understanding of the biology of these pests will lead to improved methods for reducing nematode levels and minimising their impact on turfgrass.