You pretty much know that, if a song is written about a plant, it's going to be something spectacular so, when Genesis wrote The Return of the Giant Hogweed, a horticultural legend was created.

The lyrics (below) pretty much cover everything there is to say, but perhaps, in this case, it is worth emphasising a few key points

The sap of the Giant Hogweed contains a toxic chemical which, when it comes in contact with skin, causes severe burning and blistering when exposed to sunlight. All parts of Giant Hogweed contain chemicals which can produce phyto-photodermatitis, a sensitive reaction to sunlight. Blistering within twenty-four hours is common, following which the skin discolours and turns red/purple - which can last for several months - with blistering persisting for up to five years when exposed to sunlight.

People who come in contact with Giant Hogweed are often unaware of the problems that the plant can cause, as touching the plant does not produce an immediate reaction. People's reactions vary from person to person, with children being most susceptible - people with fair skins or a sensitivity to sunlight will tend to react in a more extreme manner.

The sap will remain active for several hours after cutting, with the highest concentration of the chemicals being within the leaves rather than the stem - the roots will also cause issues and should be dealt with as cautiously as the rest of the plant.

Giant Hogweed is another plant introduced by the Victorians as a garden ornamental. Introduced in 1893 and planted in the great estates by the landscape gardeners of the time, it soon became a hit with the general public. Famed initially for its luxurious growth and huge foliage and flowers, the plant was a favourite with those looking for something exotic within their herbaceous borders.

As is typical of these Victorian introductions, the plant escaped from cultivation, spreading along linear corridors of wasteland, rivers, canals, roads and railways, along which it is easily transported.

All parts have a strong resinous smell.

Leaves are very large - up to 3 metres across -and are sharply divided and serrated with bristles on the underside.

Flowers are umbrella shaped and are very large, up to 80cm across, with many small white flowers.

Dies back in winter.

In a natural state, the plant is biennial, growing from seed in the first year, then taking between 2-5 years to reach maturity, then flowering and dying. However - if the plant is cut down before it produces seed - given enough time - it will flower again and set seed. If it is too late in the season, it will survive into the subsequent season, flowering and seeding in the following season.

Giant Hogweed relies solely on seeds for reproduction and spread, it does not reproduce by vegetative means (i.e. fragments of roots and stem) - thus, a single plant germinating from a single seed could start a significant invasion.

The huge amount of seeds that the plant produces (30-50,000) create a seed bank in the top 10cm of the topsoil. Within a dense stand of Giant Hogweed, there will be circa 6-7,000 live seeds/m2. Out of these, some 2,000 live seeds/m2 will be alive and ready to germinate, having lost dormancy over winter (typically two months at 2-4OC). About 200 seeds/m2 remain dormant in the soil and 8% are found to survive in the soil for more than one year - about 5% survive for two years after falling from the parent plant.

This would suggest that the seed bank is active for at least two years, and possibly as long as five years, assuming no more seeds fall from parent plants.

Seeds will also be spread by water and wind, as they disperse easily along watercourses, roads and highways.

The problem with invasive non-native species is the rapidity of spread and their domination of their new environment. Giant Hogweed produces huge amounts of seed, which leads to dense colonies establishing and supressing the growth of native species. Indigenous plants are displaced and there are usually associated negative impacts on ecologically sensitive and vulnerable habitats.

With its tall stems and huge seed heads, the plant is ideally suited for wind dispersal of its seeds. Many of these seeds will also fall around the plant and produce a huge viable seed bank within the topsoil. Seeds which fall into watercourses will all be dispersed downstream and washed up along the bank - often landing on bare earth ideal for establishment - thus allowing the plant to spread rapidly. The plant produces huge amounts of vegetation which cause problems with water flow and can impact on water movement during flood events.

When the plant dies back over winter, the ground beneath is exposed and bare of vegetation, leaving river banks susceptible to erosion and recolonisation by new seeds floating downstream.

As previously noted, Giant Hogweed is a serious threat to human health - any measures to control Giant Hogweed MUST take this on board!

Any strategy used to control Giant Hogweed must be undertaken with extreme care.

The object of any control strategy should include killing of the existing plants, plus eradicating the seed bank. To carry out one process without the other would be a complete waste of time. Methodologies can be chosen to suit the resources available - usually depending upon budget and timescales required.

The surface growth of Giant Hogweed can be effectively eradicated using an application of translocated herbicide.

The seed bank can also be dealt with by excavation and removal to licensed landfill - this is an expensive approach and one which would be considered environmentally unfriendly.

Using a longer term approach of seasonal applications of herbicide over a period of five to ten years would be a highly effective strategy. 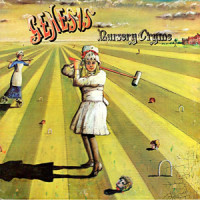 The Return Of The Giant Hogweed

Turn and run, nothing can stop them
Around every river and canal their power is growing
Stamp them out, we must destroy them
They infiltrate each city with their thick dark warning odour

They are invincible
They seem immune to all our herbicidal battering

Botanical creature stirs, seeking revenge
Royal beast did not forget
He came home to London and made a present of the Hogweed
To the Royal Gardens at Kew

Waste no time, they are approaching
Hurry now, we must protect ourselves and find some shelter
Strike by night they are defenceless
They all need the sun to photo sensitise their venom

Taken from the 1971 Genesis album Nursery Cryme which, spookily, had an image of a croquet lawn (of sorts) on the cover.

Image: Peter Gabriel in his 'be careful with the hair clippers' phase.