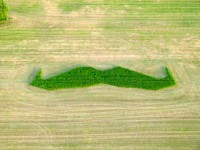 British Seed Houses (BSH) has gone back to 'grassroots' to show its support for Movember - growing a giant moustache in support of the men's health charity.

The giant 'Mo', around 120 ft by 40ft across, is a larger-than-life version of the logo used by the charity on its movember.com website.

BSH has pledged £1,000 towards the cause for which men are encouraged to grow a moustache throughout the month of November.

It is also urging turf growers, groundsmen, greenkeepers and others to grow a 'Mo' with the incentive of the owner of the best moustache submitting 'before and after' photographs winning a trip to New York.

The giant moustache was grown by Andrew Cook, the South Wales and South of England Area Sales Manager for the agricultural side of the business, who has a farm in Somerset. The £1,000 being donated by BSH will go direct to Movember and its men's health partners.

William Gilbert, managing director of BSH, said: "With so many men working in our industry Movember is an ideal cause for us to get involved with, especially as men's health issues often get ignored.

"We thought if we did something fun on a giant scale to highlight BSH's own commitment to Movember, it would encourage others to join in. All the male colleagues here will be taking part and we hope our customers will too."

As well as a long weekend for two in New York, the owner of the best 'Mo' entered in the BSH competition will win £500 spending money. Further details can be found on www.britishseedhouses.com and www.bshamenity.com.

Andrew said: "I began with a scale drawing and then marked the area out with fencing stakes in a field where we were growing grass for silage.

"I then mowed it into shape using an agricultural mower and did the final trimming with a strimmer. I was pleasantly surprised at how well it worked out."
Jon Sim, Corporate/Community Manager for Movember, said: "The giant grass moustache is certainly a 'first' and gets across a serious message in a creative and fun way. We're grateful for BSH's enthusiastic support and encourage its customers to get behind the initiative."