0 Giant support for Movember is a sight to behold 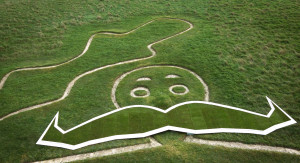 British Seed Houses has gone big to show its support for Movember by giving the world famous Cerne Abbas Giant in Dorset a grass moustache.

The huge mo added a rakish look to the imposing 180 ft tall landmark to promote the men's health charity for prostate and testicular cancer and mental health and its month long moustache growing campaign to raise awareness and funds.

Grown from British Seed Houses' Grade A grass seed, the distinctive grass moustache was carefully tended before being placed on Britain's largest chalk hill figure for the day.

The ancient naked giant is a protected site owned by the National Trust, which gave special permission to allow him to sport a mo for the first time.

William Gilbert, Managing Director of British Seed Houses, said: "Movember is an important charity and with so many men working in our industry it's one we are keen to back. The giant is an iconic male symbol which fits the campaign well.

"We really appreciate the National Trust's help in making our idea a reality." 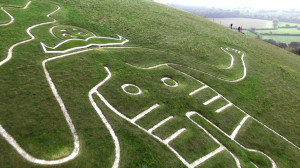 Rob Rhodes, National Trust Countryside Manager, said: "It is all a bit of fun to highlight an important subject so we were happy to give our support and join in the fun of Movember. We really appreciate the care and thought that went into planning how the moustache was made for the Cerne Abbas Giant so it could be carried into position and once removed, there won't be any damage to him. I am sure the giant would approve.

"There has always been a bit of discussion about how old the giant is and who it is meant to represent.

"One theory is that it is Oliver Cromwell and we know, from Cromwell's death mask, that he had a moustache - so there may be a historical precedent for giving the giant one for a day."

The moustache measures 36ft by 9ft and was assembled with care on the hillside site to form the distinctive Movember moustache logo.

British Seed Houses believes in thinking big when it comes to supporting Movember.

Last year it grew the world's biggest grass moustache, around 120ft by 40ft, in Somerset on a farm owned by Andrew Cook, the South Wales and South of England Area Sales Manager for the agricultural side of the business. This time it wanted to find a giant man who could carry off a giant moustache with aplomb.

British Seed Houses is a family business with nearly 200 years of history. The largest privately owned seed company in the UK, it provides top quality seeds and fertilisers for agriculture and for the amenity sector of golf, sports and landscaping. The company aims to produce as much of its grass seed as possible in the UK.

Movember's vision is to have an everlasting impact on the face of men's health. It supports three of the biggest health issues facing men - prostate cancer, testicular cancer and mental health. Funds are used to support awareness and education, for research, to help men living with and beyond cancer and to help men stay mentally healthy.