0 Give your turf a kick start 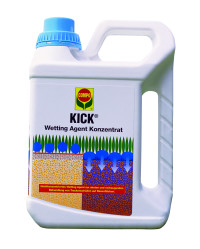 With unpredictable weather the only certainty on golf courses, greenkeepers need a little help to make the most of water.

Developed by BASF with anionic and non-ionic tensides, Kick is between four and six times more concentrated than any other wetting agent, offering superior performance and economy compared to other products on the market.

Ideal for rapid re-wetting of turf areas which contain high levels of thatch, soil borne fungi, evidenced by Dry Patch fairy rings, or areas which have become compacted through heavy use, Kick can be applied with conventional spraying equipment.

British Seed Houses' Simon Taylor points out that Kick is a highly versatile wetting agent. "Kick can be used for broad application or targeted to cure LDS syndrome, and severely affected areas can be spot treated, when we would also recommend aeration to add penetration. As it is more concentrated than other products, Kick can be used at lower application rates, offering great value for money and highly effective treatment."