Estádio José Alvalade is a football stadium in Lisbon, Portugal, home of Sporting Clube de Portugal, one of the country's biggest clubs. The club are best known in the UK as Sporting Lisbon or, simply, Sporting. Over the years it has nurtured some very talented players, including Luis Figo, Cristiano Ronaldo and Nani.

Having replaced the former Estádio José Alvalade (1956), it is the centre of a complex called Alvalade XXI, which includes a mall called Alvaláxia with a twelve screen movie theatre, a health club, the club's museum, a sports pavilion, a clinic and an office building. It was designed by Portuguese architect Tomás Taveira.

It was classified by UEFA as a 5-star stadium, enabling it to host finals for major UEFA events. It has a capacity of 50,044 and was acoustically engineered so it could be used as a venue for major concerts.

The official opening was on 6 August 2003 when 'Sporting' played and beat Manchester United 3-1. It also hosted the 2005 UEFA Cup Final between Sporting and CSKA Moscow, which CSKA won 3-1. On the exterior, the stadium features traditional Portugese multi-coloured tiles. Seats are arranged in a random colour mix to give an illusion that the stadium is always at full capacity.

The maintenance of the stadium pitch is undertaken by Head Groundsman, José Diogo, who is supported by agronomist, Mateus Filipa de Almeida

The grass mixture consists of 40% Poa pratensis (Kentucky bluegrass) and 60% Lolium perenne (perennial ryegrass). This seed mixture is applied at a rate of 35-40g/m2 early in the season. Throughout the season, the pitch is oversown monthly with 10g/m2 Lolium perenne and twice a year, in spring and autumn, with 10-15g/m2 Poa pratensis. "We are trying to reduce the affects of each game within a twenty-four hour period," said Filipa. "That includes repairing divots and scars, topdressing with sand and aerating after each match with 8mm solid tines to a depth of 10-15cm."

The stadium pitch is sprayed with liquid fertiliser throughout the year. Various concoctions are used, algae extracts, humic and fulvic acids are often included. In addition, granular fertilisers are used depending on the needs of the grass and the climatic conditions. Again, these will include a mix of quick acting and slow-release fertilisers.

José explains that the fertiliser regimes are based around regular, monthly soil, leaf and water analyses. Upon suspicion of turf diseases, samples are sent to a laboratory for examination. Despite the good mechanical maintenance and fertiliser programmes, the pitch occasionally shows infections caused by leaf spot and dollar spot. When this happens, Filipa recommends a liquid potassium fertiliser to promote the sward's tolerance.

The irrigation water has a relatively high pH, so pH lowering products are also repeatedly added.

The biggest problems in the stadium are low sunlight in winter and very high summer temperatures, combined with inadequate ventilation.

"The temperature difference in the summer between the north and south sides of the stadium is often more than 10OC," explains José. "Despite having a good irrigation system, this can often cause dry patches, so we end up hand watering and applying wetting agents to these areas."

In season 2011-12, and because of the ongoing problems encountered, the installation of an artificial pitch was considered. However, José and Filipa were able to impress on the decision makers that, with the correct equipment and maintenance regimes, the pitch could be 'saved', and at considerably less cost. 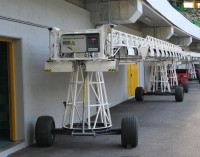 SGL lighting rigs are now used, which has helped overcome the low sunlight issues, whilst large fans have improved air movement. Even so, there is some algae growth due to the shadows. "It has been quite a major problem in some areas of the pitch," bemoans José, who uses ferrous sulphate to tackle the problem.

Filipa explains that understanding the precise parameters he and José are working within has had a significant impact on the implementation of appropriate measures to prevent further grass diseases and promote stronger growth.

The pitch is regularly cut with a cylinder mower to a height of 22-26mm, how many times a week is dependent on the time of year.

De-thatching is only done if there is a gap between games of at least three weeks.

Perhaps surprisingly, a turf iron is used over the pitch before each game to get the surface as smooth as possible. Compensating for any soil compaction is the reason behind José's post match aeration.

Twice a year the stadium pitch is deep aerated using hollow tines to a depth of 18-20cm. "This helps to resolve the increasing compaction in the turf-bearing layer during the season," says José. The annual renovation programme is completed by topdressing with twenty-five tonnes of dry silica sand.

Overseeding during summer renovation means that the young seedlings are very susceptible to drying out in the hot temperatures, so the cutting height is raised to counteract this. It also helps to promote deep roots and, as a consequence, improve the sward's tolerance to drought stress and diseases. During the summer months, growth regulators are also used.

Filipa believes that it is important to continuously measure the root depth and the strength of the turf. "This helps us to properly assess how well the grass is performing," he concludes. 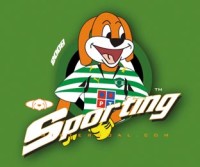 Sporting Clube de Portugal, commonly referred to as Sporting CP or Sporting, and colloquially known as Sporting Lisbon outside of Portugal, is a Portuguese multi-sports club based in the country's capital city of Lisbon. Although they successfully compete in a number of different sports, Sporting is mostly known for its football team.

Founded in Lisbon on 1st July 1906, it is one of the "Três Grandes" (The Big Three) football clubs in Portugal, with Sport Lisboa e Benfica and Futebol Clube do Porto being the other two clubs, and Sporting's two biggest rivals. With more than 100,000 registered club members, its teams, athletes and supporters are often nicknamed Leões (The Lions) by its fans.

During the first century of the club's existence, the teams and the athletes of Sporting won three Olympic gold medals, as well as many silver and bronze medals and thousands of national and district titles.

José Alfredo Holtreman Roquette, better known as José Alvalade, made known his wish to transform Sporting into "...a big club, as big as the biggest in Europe." Daring to boldly go where no Portugese had gone before, and at a time when, in Portugal, sports were still activities in their developmental stages and having mainly elitist characteristics, the first "Sportinguistas", which included José's three brothers, managed to found what became the present day club.

Sporting has more than three million fans on all continents, with up to 300 supporters' clubs, offices and delegations, as well as more than 150,000 affiliates.

It was one of the founding members of the Primeira Liga in 1933 and, along with Porto and Benfica, has never been relegated from the Primeira Divisão (First Division) of Portuguese football.